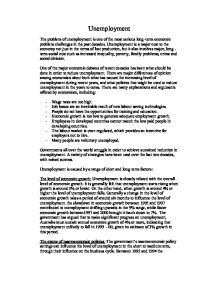 Unemployment in Australia.Unemployment is a major cost to the economy not just in the terms of lost production, but it also involves major, long-term social cost such as increased inequality, poverty, family problems, crime and social division.

Unemployment The problem of unemployment is one of the most serious long-term economic problem challenges in the past decades. Unemployment is a major cost to the economy not just in the terms of lost production, but it also involves major, long-term social cost such as increased inequality, poverty, family problems, crime and social division. One of the major economic debates of recent decades has been what should be done in order to reduce unemployment. There are major differences of opinion among economists about both what has caused the increasing level of unemployment during recent years, and what policies that might be used to reduce unemployment in the years to come. There are many explanations and arguments offered by economists, including: - Wage rates are too high - Job losses are an inevitable result of new labour saving technologies. - People do not have the opportunities for training and education. ...read more.

The government has argued that to make significant progress on unemployment, Australia must sustain annual economic growth of 4% or more, indicating that unemployment unlikely to fall in 1999 - 00, given its estimate of 3% growth in this period. The stance of macroeconomic policies: The government's macroeconomic policy settings can influence the level of unemployment in the short to medium term, through their influence on the business cycle. Between 1992 and 1994 the Government had an expansionary macroeconomic policy, with large budget deficits and low interest rates, which were intended to boost economic activity and lower unemployment. the impact of these policies was felt through a substantial lift in economic activity by 1994 and a reduction in unemployment from over 11% to around 8.5% by mid 1995 . A shift towards tighter monetary and then tighter fiscal policy contributed to slower economic growth in 1996-97, which resulted in a slight increase in the level of unemployment. ...read more.

One of the most significant costs in the short-term is a loss of jobs in less efficient industries and in areas undergoing major reforms such as public utilities which are being privatised. Large tariff cuts have contributed to the loss of jobs in manufacturing industries, new technologies have allowed workers to be replaced in service industries and governments have reduced their workforces significantly. Productivity: The productivity of labour is a significant factor affecting the decision of employers to increase or reduce employment. Low productivity tends to encourage employers to use capital in preference to labour in production. Despite improved performance in the 1990s, overall labour productivity in Australia is still only around average levels for industrialised countries. Labour market: Inflexibility of the labour market and high minimum wages may result in a lack of equilibrium between demand and supply of labour. Prime minister Howard has argued that the tradition of high minimum wages in Australia is a factor behind Australia's high level of unemployment. The Government argues that the labour market is too highly regulated, and that the price of high minimum wages is a higher level of unemployment. ...read more.