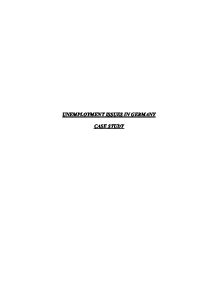 UNEMPLOYMENT ISSUES IN GERMANY CASE STUDY Geographic situation Germany is located in Central Europe, bordering the Baltic Sea and the North Sea, between the Netherlands and Poland, south of Denmark. The country is sharing boundaries with Austria, Belgium, Czech Republic, Denmark, France, Luxembourg Netherlands, Poland, and Switzerland. Germany can be divided into three major geographic regions: the low-lying German plain, the central German uplands, and the ranges of the Central Alps. The climate is temperate and marine with cool, cloudy, wet winters and summers. Germany has many natural resources such as iron ore, coal, potash, timber, lignite, uranium, copper, natural gas and many others. Coming into the 62nd position, the country has an area of 357,021 sq km. 33% of Germany's land is for arable land, 1% is permanent crops, 15% is permanent pastures, 31% is made of forests and woodla```nd and there's a 20% of other. General information The population of Germany is 83,252,000 million but 7 million of them are foreign residents. The age structure is 0-14 years: 14.1%, 15-64 years: 66.4%, and 65 years and over: 19.4%. The capital of Germany is Berlin, which is the largest city with nearly six and a half million inhabitants and the official language spoken is German. Germany is the 62nd largest country of the world with an area of 356,910 sq. km. The ethnic make-up of the country is divided into 92% of German and 2% of Turkish people as well as minorities such as Italian, Serbo-Croatian, Greek, Polish and others. The German population is mostly Protestant with 38%, Roman Catholic of 34% and Muslim of 4%. Life expectancy is 75 years for men and 81 years for women with infant mortality 4.7 deaths per 1000 births. There are around 2 610 000 people who lives in poverty but 99% of adults are all literate, although the unemployment rate is 11.6%. The main source of communication is telephones with 50,900,000 users followed by Internet with 32,100,000 users. ...read more.

Germany's and Europe's ties with the United States remain extremely close. This transatlantic partnership is based on vital mutual interests and values, and has various historical, human, cultural and political ties. Unemployment Causes One of the major problems that Germany is dealing with nowadays remains the steadily high unemployment rate and slow growth in the euro zone. First of all, unemployment is a basic measure of the health of any economy and it's important to briefly discuss the causes and effects of unemployment. Basically, unemployment represents a tremendous waste of talent and resources. Since the work hours of the unemployed cannot be stored, the time lost can never be recovered. Second of all, unemployment causes psychological as well as physical harm on the jobless and their families. Joblessness remains a prominent political issue in Germany. In contrast to a number of other European countries and especially in contrast to the US, Germany appears to be unable to make almost any progress in improving labor market and the welfare state in order to reduce its stubbornly high unemployment rates. Unemployment has extended upwards over the last three decades. At the beginning of the 1970s, Germany enjoyed a situation of full employment with negligible officially recorded unemployment rates. The current unemployment in Germany, which crossed above the politically charged five million mark in January, rose again in February, to a rate of 12.6 percent with 5.2 million people out of work, the Federal Labor Agency said on Tuesday. Recent figures show that this rate is the highest since the World War II, which rose from 12.1 percent in January. It is very easy to argue that persistently high unemployment in Germany is due to the fact that labor costs are too high, real wages too inflexible and the salary structure too dense. Moreover, a large quantity of construction employees are out of work due to a bitterly cold winter but another reason for these high numbers was a statistical change in the number of senior citizens and the recipients of social welfare payments as unemployed. ...read more.

Moreover, Germans should stop moving jobs and factories outside of the country in search of cheaper labour and lower taxes, as they do. However, they should be focusing on better ideas, such as investing in Germany rather then outside the country to provide badly needed employment. For this purpose, they could try to reduce taxes in order to make the market attractive to companies thus creating an effective increase in Germany employment. Another key policy is, the education system, which is a big part of employment nowadays. It is essential to apply life long-learning for it, because it has become more important and can surely be improved. Many have difficulties finding a job because they are not participating in life long-learning and are unemployed because they lack education. The development of the economy is characterized by restructuring, which leads to the elimination of unskilled jobs. For the employment of a person with a university or higher technical college degree has increased in spite of the tensions in the labor market, whereas the number of employees with a low level of education or professional training has harshly decreased. It's gotten worse and we are at a high today in the year 2006 with an unemployment rate of 12.6 % since the years before World War II. If these current steps are properly integrated, it will have an overall positive impact over unemployment. Nevertheless only an encompassing and bold set of institutional reforms including not only the labor market, but also the goods and the capital market can enable Germany to overcome their constant unemployment problem. This is particularly relevant for German labor market, which has been characterized for decades by high-productivity and high-wage strategy. Nevertheless, the experiment of lowering taxes to remove unemployment assistance should be risked with more confidence than it has been. At the moment, almost anything appears better than the policy of giving in. ...read more.