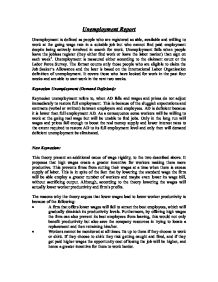 Unemployment Report Unemployment is defined as people who are registered as able, available and willing to work at the going wage rate in a suitable job but who cannot find paid employment despite being actively involved in search for work. Unemployment falls when people leave the jobless register (they either find work or leave the labor market) than sign on each week1. Unemployment is measured either according to the claimant count or the Labor Force Survey. The former counts only those people who are eligible to claim the Job Seeker's Allowance and the later is based on the International Labor Organization definition of unemployment. It covers those who have looked for work in the past four weeks and are able to start work in the next two weeks. Keynesian Unemployment (Demand Deficient): Keynesian unemployment refers to, when AD falls and wages and prices do not adjust immediately to restore full employment. This is because of the sluggish expectations and contracts (verbal or written) between employers and employees. AD is deficient because it is lower than full employment AD. As a consequence some workers will be willing to work at the going real wage but will be unable to find jobs. Only in the long run will wages and prices fall enough to boost the real money supply and lower interest rates to the extent required to restore AD to its full employment level and only then will demand deficient unemployment be eliminated. New Keynesian: This theory present an additional cause of wage rigidity, to the two described above. It proposes that high wages create a greater incentive for workers making them more productive. ...read more.

Alternatively the Keynesians argue that wages are not binding and unemployment was high because the product market did not clear, with prices above the market clearing rate. However, markets are assumed to be competitive and prices within these markets must be determined by external forces, if at the existing prices fails to clear the markets. So therefore it is likely that unemployment was rife because wages were maintained artificially above the equilibrium level, thus preventing firms to hire more labor. This argument is supported by a study of the labor market in the early 60s and 70s. Then it was widely believed that Britain was suffering from a shortage of skilled labor. This was most evident when governments were trying to raise the levels of economic growth but found that growth was inhibited by the skill gap. Employers complained of skill 'bottlenecks' which compelled them to pay higher wages in order to keep their best employees. As a result wage rates rose, causing unemployment and loss of competitiveness in trade. Furthermore, the economy suffered, as others, from the oil shocks in the 70's. The Business Cycle theorist argue that 70% of post war business cycles were caused by supply shocks. Supply shocks have an adverse effect on AS. This caused unemployment to rise, which led to a fall in consumption and investment, causing a shift in AD. Table 1 Year (ILO) Unemployment Rate (%) Growth in Employment (%) Growth in GDP (%) 1956-66 2.5* --- --- 1976-74 3.4* --- --- 1975-79 5.8* --- --- 1980-82 10.9* --- --- 1982-91 9* 0.7 2.4 1992-2001 6.6* 0.3 2.5 1992 9.6 -2.8 -0.3 1993 10.2 -0.7 2.1 1994 9.2 0.8 4.0 1995 8.0 0.9 2.4 ...read more.

By comparison, the unemployment rate for men range from 13 per cent for those aged 16-24 to a low rate of 4 per cent for the 40-49 age group. Unemployment rates have been calculated for married and non-married men at 4 per cent and 11 per cent respectively, and for women (without dependent children) at 2 per cent and 8 per cent respectively. The rate for non-married women with dependent children at 14 per cent is higher than for non-married women without dependent children at 8 per cent. At least some of these differences are due to the different age distributions of these categories. In all, 63 per cent of unemployed women with dependent children were looking specifically for part-time work in spring 2000, compared with 33 per cent of women with out dependent children and only 11 per cent of men. However, the British statistics conceal widespread hidden unemployment among women. This is caused by two related factors. The first is that there are many (especially older) women who are not eligible for unemployment benefit. This is because in the past (before 1978) they paid reduced 'married women's' insurance contributions, or they have not been in recent paid work and are supported financially by their partners, or because their periods of paid work have been too discontinuous. There is no incentive for these women to register formally at unemployment offices. The second is that even when they have registered, they must satisfy the official that they are 'genuinely seeking work' in order to be regarded as 'job-seekers'. This requirement is difficult to meet for women with caring responsibilities, as without an income they cannot afford to make arrangements in readiness for a job. ...read more.