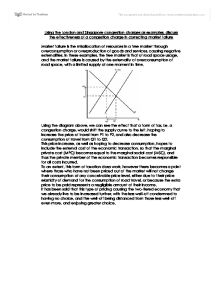 Using the London and Singapore congestion charges as examples, discuss the effectiveness of a congestion charge in correcting market failure Market failure is the misallocation of resources in a free market through overconsumption or overproduction of goods and services, causing negative externalities. In these examples, the free market is that of road space usage, and the market failure is caused by the externality of overconsumption of road space, with a limited supply at one moment in time. Using the diagram above, we can see the effect that a form of tax, i.e. a congestion charge, would shift the supply curve to the left, hoping to increase the price of travel from P1 to P2, and also decrease the consumption of travel from Q1 to Q2. This price increase, as well as hoping to decrease consumption, hopes to include the external cost of the economic transaction, so that the marginal private cost (MPC) ...read more.

Road travel has a highly inelastic demand and marginal private benefit curve, and so a large increase in price could lead to only a minute decrease in the quantity demanded. A way of trying to correct this could be to improve the quality of service given by substitutes to road travel, so that the elasticity of road travel becomes more elastic, giving a more responsive change in consumption when there is a change in price. The improvement of substitutes would also naturally decrease the consumption of road travel simply because there would be other alternatives that are just good as road travel. For instance in London, the Underground and bus systems in place are seen as some of the best in the world, and so road travel has been noted as inferior in the busy city that London is. However it was still seen as necessary to implement a congestion charge in 2003. ...read more.

This is also costly due to the level of technology being used, and also, there are car drivers who remove their chip so as to avoid paying the charge. Officials have to assess CCTV footage and detect those who do this; another cost to the process. In London there are costs in charging individuals, through postage, fines, and issuing of permits, as well as tracking those who refuse to pay. Overall, congestion charging does decrease the consumption of road travel and so to an extent does aid in the correction of market failure, however the operation of congestion charges alone would not have the desired effect. With increasing quality of substitutes, we will see decreased consumption of road travel, however there will always be a demand for road usage, and this will increase at peak times; with finite and limited resources congestion is something that we will have to learn to live with, especially with increasing populations, and so it is vital that substitutes improve. ?? ?? ?? ?? ...read more.