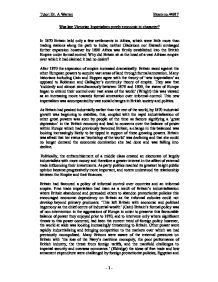 Was late Victorian Imperialism purely economic in character? In 1870 Britain held only a few settlements in Africa, which were little more than trading stations along the path to India; neither Gladstone nor Disraeli envisaged further expansion however by 1890 Africa was firmly established into the British Empire under formal control. Why did Britain sit at the head of a vast African empire over which it had claimed it had no desire? After 1870 the expansion of empire increased dramatically. Britain raced against the other European powers to acquire vast areas of land through formal annexation. Many historians including Cain and Hoppen agree with the theory of 'new imperialism' as opposed to Robinson and Gallagher's continuity theory of empire. They saw that 'suddenly and almost simultaneously between 1870 and 1900, the states of Europe began to extend their control over vast areas of the world' (Wright) this was viewed as an increasing move towards formal annexation over informal control. This new imperialism was accompanied by vast social changes in British society and politics. As Britain had peaked industrially earlier than the rest of the world, by 1870 industrial growth was beginning to stabilize, this, coupled with the rapid industrialisation of other great powers was seen by people of the time as factors signifying a 'great depression' in the British economy and lead to concerns over the balance of power within Europe which had previously favoured Britain, a change in this balanced was looking increasingly likely to be tipped in support of these growing powers. ...read more.

came to prominence in British discussions about Egypt just before intervention in 1882 where they only intervened to maintain an economic order that would suit Britain. Furthermore the interest in West Africa had been apparent long before the British occupation of Egypt. In 1873 British extension into the Gold coast had been authorized. Cain declares that the commercial crisis of the 1870s was giving both France and Britain colonialists in West Africa the incentive to expand the boundaries of the existing coastal enclaves, this lead to fear from France and Britain of each other's expansionist ideas which increased the idea for 'anticipatory annexation' (Hynes) on both sides. A factor that I have not discussed here is the way in which the idea of power was changing. In the Mid-century when Britain enjoyed the monopoly of the world economy and the classical liberal ideology of Britain seemed to be exported throughout its trade routes, with no foreign competition worthy of attention Britain saw power in terms of economy and trade. The theory of liberalism confounded this idea, that wars were something of feudal times and in the new social age free trade would ensure global harmony as it creates an environment suitable to all. However with the industrialization of foreign powers and their increasing threat to Britain this idea of power began to change. Due to the arrogance and ignorance of the British, we have seen how technological advancement that developed within the century was not taken up in Britain; a good example is in the cotton trades. ...read more.

governments, it does not mean that they were not done so on grounds of principle or ideology, as neither of these two factors appears to have had the chance to play much of a prominent role in this field. The governments at the time were expanding into Africa long before Gordon and Carnavron and so I feel that their impact was minimal. I believe that invariably all Imperial objectives during this period principally share an economic base. Taking into consideration the strategic theory put forward by Robinson and Gallagher upon more careful consideration we see how even this theory withholds economic foundations, by selecting to defend existing empire they are primarily defending trade interests and trade routes and thus protecting the British economy. Due to The rise of foreign powers and the idea of 'imperialism of fear' put forward by Eldridge yet again we see the economic motives at work, as Britain was afraid of becoming economically eclipsed. Even if we believe that popular opinion held great sway over policy we see how at home, the upper classes were interested in distracting the malcontent of the working classes, the working classes would attain jobs through the acquisition of new foreign markets, and the middle classes were interested in their investments, which lay in industry and trade determined this. The changing of the world into capitalism brought about the economic motives and desires of all industrial powers to acquire an empire with which to extend trade with. ...read more.