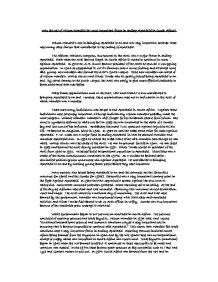 Was the role of Nelson Mandela the most important factor in ending Apartheid in South Africa?

Was the role of Nelson Mandela the most important factor in ending Apartheid in South Africa? Nelson Mandela's role in bringing Apartheid to an end was very important, however, there were many other factors that contributed to the ending of Apartheid. The African National Congress, also known as the ANC, was a major factor in ending Apartheid. Even when the ANC became illegal in South Africa it moved to continue its work against Apartheid. In 1940 Dr. A. B. Xuma became president of the ANC; he rescued a struggling organisation. In 1944 he reorganised it, out its finances onto a secure footing and attracted some able, young, new members who formed the ANC's Youth League. These new members consisted of of Nelson Mandela, Walter Sisulu and Oliver Tambo who all greatly helped bring Apartheid to an end. By 1848, thanks to the Youth League, the ANC was ready to give more effective leadership to black resistance than ever before. Other black organisations such as the PAC, UDF and COSATU also contributed to bringing Apartheid to an end. ...read more.

As a student he believed white-dominated political groups could never win against Apartheid. He contributed to bringing Apartheid to an end by making young black people believe they were important. Mass protests also helped bring Apartheid to an end; the examples are the Sharpville massacre (in 1960) and the Soweto (in 1978). Sharpville was a very important turning point in the fight against Apartheid. In 1960 the PAC organised a protest against the pass laws at Sharpville. Some 5000 unarmed protesters gathered. Stone throwing led to shooting. At the end of the day 69 Africans were dead and 178 wounded. Obviously this massacre caused devastation, upset and anger. The ANC called for a national day of mourning. The ANC and PAC were banned by the government, Mandela was imprisoned along with 2000 other anti-apartheid activists and Oliver Tambo fled abroad to set up ANC offices in safety. Soweto was also important because of the worldwide press coverage it attracted. White governments began to put pressure on apartheid in South Africa. The pressure consisted of sporting pressure and trade boycotts. ...read more.

However, the hard-line Afrikaners felt Apartheid should not end. Neighbouring states had black governments and so there was fighting against Apartheid inside and outside South Africa. The National Parliament increasingly felt isolated. Another short term factor that helped bring Apartheid to an end was the collapse of communism in 1989. The fear of communism had gone and therefore there was no longer a valid reason for Western governments, such as America and Britain, to support South Africa's white government. Nelson Mandela contributed largely to the ANC; he was a main individual in the struggle against Apartheid and devoted his life to fighting for his beliefs. However, I do not believe that Mandela was the most important factor in ending Apartheid. I think that the mass protests were extremely important in ending Apartheid and I feel they were more so than Mandela. Another factor I believe to have been more influential than Nelson Mandela was the trading boycotts because without South Africa's trade market money would become a problem. Mandela was, though, probably more important than pressure from white liberals in South Africa and neighbouring states. On the whole Mandela's work largely contributed to the end of Apartheid yet I do not believe he was the most important factor. ...read more.