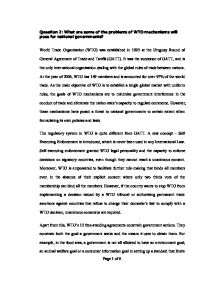 What are some of the problems of WTO mechanisms will pose for national governments?

Question 2: What are some of the problems of WTO mechanisms will pose for national governments? World Trade Organization (WTO) was established in 1995 at the Uruguay Round of General Agreement of Trade and Tariffs (GATT). It was the successor of GATT, and is the only international organization dealing with the global rules of trade between nations. At the year of 2006, WTO has 149 members and is accounted for over 97% of the world trade. As the main objective of WTO is to establish a single global market with uniform rules, the goals of WTO mechanisms are to minimize government interference in the conduct of trade and eliminate the nation-state's capacity to regulate commerce. However, these mechanisms have posed a threat to national governments to certain extent when formulating its own policies and laws. The regulatory system in WTO is quite different from GATT. A new concept - Self Executing Enforcement is introduced, which is never been used in any International Law. Self executing enforcement granted WTO legal personality and the capacity to enforce decisions on signatory countries, even though they cannot reach a unanimous consent. Moreover, WTO is empowered to facilitate further rule-making that binds all members even in the absence of their explicit consent where only two thirds vote of the membership can bind all the members. ...read more.

The ruling is automatically binding unless there's a consensus among all the countries - including the winning country - to stop its adoption. Once it's adopted, there is a period that cannot exceed 15 months during which the country that lost the case must change its law to comply with the orders of the WTO. Trade sanctions are automatically adopted if a country has not changed its laws within a reasonable time period. There is no outside appeal from a WTO decision. There is only an internal appeal to an appellate body whose staff is paid by the WTO. There are problems in this mechanism. First the power of WTO is over the national governments and other international organization since its judgment is final and cannot appeal in else where. If the rules of WTO have bias or unfairness, no way can the countries do. The fairness of the WTO criteria in choosing the panel is in doubt. Another problem is that the terms in this dispute settlement system seems only favor of rich countries. The whole system just ignores the ability of the countries to go through the system. That would result, the countries that have the money to file win. In fact, half of the cases were brought by US and none by developing countries simply because they did not have to resource to do so. ...read more.

There is no requirement that international standards be met, only that they cannot be exceeded. Also, the rules set by WTO are not based on the health and economic well-being of people, but rather on the enhancement of the power and wealth of the world's largest corporations and financial institutions. And finally, it is the national governments require proving certain product is dangerous rather than the corporate to prove it is safety, which is very difficult to do so. In conclusion, the mechanisms of WTO pose a threat to domestic sovereignty or democratic, accountable policymaking and weaken national boundaries and the power of national and subnational communities, while strengthening the relative power of transnational corporations. The conflict between the countries and the mechanisms of WTO can be explained by the different views between liberalism and mercantilism. Purely pursuing liberalization goal may have problems as well. Protecting the countries' welfares should also take into consideration to certain extent. Moreover, whether "equal trade" or "fair trade" is more important to international trade should be discussed. WTO should take consideration into different goal between developed and developing countries. However, whatever the goals are, the main aim of WTO should be to improve the well being of whole people instead of just commercial. Reference: 1. The WTO's slow motion coup against democracy: an interview with Lori Wallach 2. The WTO Five years of reasons to resist corporate globalization <http://www.thirdworldtraveler.com/WTO_MAI/WTO_FiveYears.html> 3. Trade Brief on The WTO Dispute Settlement <http://userwww.service.emory.edu/~erein/research/SIDA.pdf> ?? ?? ?? ?? Page 1 of 6 ...read more.

***
This is a vast topic that requires much research. The writer has made a brave attempt but has not read widely enough around the topic. More examples would help of where the WTO has influenced laws. A balance would also be useful. Why do countries belong to it? What are the benefits of it?