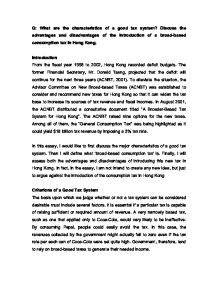 What are the characteristics of a good tax system? Discuss the advantages and disadvantages of the introduction of a broad-based consumption tax in Hong Kong.

Q: What are the characteristics of a good tax system? Discuss the advantages and disadvantages of the introduction of a broad-based consumption tax in Hong Kong. Introduction From the fiscal year 1998 to 2002, Hong Kong recorded deficit budgets. The former Financial Secretary, Mr. Donald Tsang, projected that the deficit will continue for the next three years (ACNBT, 2001). To alleviate the situation, the Advisor Committee on New Broad-based Taxes (ACNBT) was established to consider and recommend new taxes for Hong Kong so that it can widen the tax base to increase its sources of tax revenue and fiscal incomes. In August 2001, the ACNBT distributed a consultative document titled "A Broader-Based Tax System for Hong Kong". The ACNBT raised nine options for the new taxes. Among all of them, the "General Consumption Tax" was being highlighted as it could yield $18 billion tax revenue by imposing a 3% tax rate. In this essay, I would like to first discuss the major characteristics of a good tax system. Then I will define what 'broad-based consumption tax' is. Finally, I will assess both the advantages and disadvantages of introducing this new tax in Hong Kong. In fact, in the essay, I am not intend to create any new idea, but just to argue against the introduction of the consumption tax in Hong Kong Criterions of a Good ...read more.

The imposition of consumption tax has been a recurrent theme in the past decade. As early as May 1989, the Finance Branch of the Hong Kong SAR government issued a consultation document called "Consultation Paper on Sales Tax". The consultation document proposed to broaden the tax base in Hong Kong through the introduction of a broad based Wholesales Sales Tax. It mainly emphasizes on the weakness of the existing fiscal structure that building on a narrowed tax base. In 2000, the ACNBT recalled the introduction of the consumption tax as one of the options to broaden the tax base and the tax was suggested to be applied on all goods and services. Advantages of Introducing Consumption Tax The ACNBT analyzed the comparative advantages of imposing the Consumption Tax in terms of broadness, neutrality, fairness, revenue yield, effectiveness, efficiency, international competitiveness, flexibility, certainty and simplicity. These advantages will be elaborated in the following. Since the general consumption tax will be taxed on personal consumption, everyone needs to pay whenever he or she consumes. Thus, the scope of the tax is very broad and it is relatively difficult to evade from the tax. Meanwhile, it meets the criteria of neutrality as the consumption tax will be imposed on almost every aspects of consumption rather than on a particular item. ...read more.

It will greater the burden of the poor group, especially under this poor economic condition. As a consequence, it will eventually widen the income gap between these two groups and income redistribution effects will be resulted (Gentry & Hubbard, 1997, p1). Conclusion There is no doubt that the imposition of consumption tax can stabilize the income source as well as to increase the government financial income which can solve both structural operating deficit and cyclical operating deficit. Most importantly, imposing consumption tax can benefit the financial status in the future. Nevertheless, it is advised that consumption tax should not be imposed in Hong Kong at present. As mentioned above, it is not a wrong time to impose and there are numbers of undesirable impacts followed. So the government has to consider deliberately before having any planning or action. Strictly speaking, imposing consumption tax cannot effectively solve the problem of narrow tax base as the extra tax revenue from general consumption 3% consumption tax is not able to cover the huge expenditure and deficit of the government. With a serious financial deficit, the most important thing for the government to do is to minimize or reduce her expenditure to avoid inefficient use of resources and to improve the value for money. For example, cutting the salary of civil servant by 4.75% can save $6 billions in a financial year. Not only does it alleviate the deficit problem, but reduce social discontent towards the government also. ...read more.