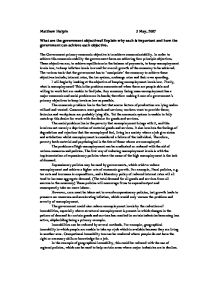 Matthew Halpin 3 May, 2007 What are the government objectives? Explain why each is important and how the government can achieve each objective. The Government primary economic objective is to achieve economic stability. In order to achieve this economic stability the government focus on achieving four principle objectives. These objectives are; to achieve equilibrium in the balance of payments, to keep unemployment levels low, to keep inflation levels low and for overall growth of the economy to be achieved. The various tools that the government has to 'manipulate' the economy to achieve these objectives include; interest rates, the tax system, exchange rates and their own spending. I will begin by looking at the objective of keeping unemployment levels low. Firstly, what is unemployment? This is the problem encountered when there are people able and willing to work but are unable to find jobs. Any economy facing mass unemployment has a major economic and social problem on its hands; therefore making it one of a government's primary objectives to keep levels as low as possible. The economic problem lies in the fact that scarce factors of production are lying under-utilised and wasted. Consumers want goods and services; workers want to provide them; factories and workplaces are probably lying idle. ...read more.

The fiscal policy too can be used through changes in the levels and direction of government spending and through changes in taxation to achieve low levels of inflation. It can do this through taxation by reducing taxes. This would increase household's disposable incomes and therefore personal consumption. This too would result in increased profitability for firms and therefore the level of investment to increase. As a result of this firms could reduce prices due to increased profitability for firms this increasing the level of investment. The government can also attempt to control inflation with the implementation of contractionary policies. Strict control of the growth money supply reduces aggregate demand and pressures in the labour market. Contractionary polices include price and income policies which can be used to control inflationary pressures for short periods of time. Inflation levels are also important as they also affect unemployment levels in several ways. If inflation levels are high this would lead to decreases in household's disposable incomes as the cost of goods and prices generally increase therefore reducing the amount of money to spend on firms goods and services this reducing the aggregate demand for the economy. This will result in a decrease of companies profits and/or sales revenue and bring about increases in their costs as stock is being produced however it is not being sold, or less is being sold. ...read more.

Another benefit for import controls is the so-called infant industry argument. For example, if the government wanted to develop a new industry but import competition was so fierce that no entrepreneurs would be prepared to risk his or her capital. Applying import controls would allow such a new firm to make a good start. Eventually, import controls could be removed as the industry matured and is able to compete successfully on world markets. The government's fourth final objective is to achieve and sustain economic growth. Economic growth is defined as increase in output and real incomes and is usually measured using gross domestic product (GDP). The government could take to various measures to obtain economic growth. The government could attract further investment; this would be either generated domestically or from abroad. This additional investment would increase the amount of capital per person in the UK and too increase productivity in the economy. They could also enhance economic growth with education and training, this would also increase human capital, consequently making workers more productive and labour markets more flexible. Changes in technology could also lead to the availability of bigger and better machinery, and help create better ways of managing people. The government could also encourage and increase economic through the strengthening of alliances with other countries and encouraging exports to new markets. This would increase demand for our country's products and in turn increase economic growth. ...read more.