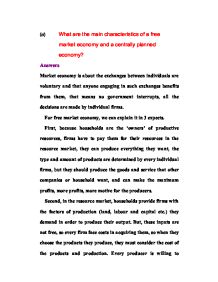 What are the main characteristics of a free market economy and a centrally planned economy?

(a) What are the main characteristics of a free market economy and a centrally planned economy? Answers Market economy is about the exchanges between individuals are voluntary and that anyone engaging in such exchanges benefits from them, that means no government interrupts, all the decisions are made by individual firms. For free market economy, we can explain it in 3 expects. First, because households are the 'owners' of productive resources, firms have to pay them for their resources in the resource market, they can produce everything they want, the type and amount of products are determined by every individual firms, but they should produce the goods and service that other companies or household want, and can make the maximum profits, more profits, more motive for the producers. Second, in the resource market, households provide firms with the factors of production (land, labour and capital etc.) ...read more.

that is because if every scope of consumers has the same amount of allocation of resources for the production, some consumers will have less motivation to buy the products. Inequity happens. For the centrally planned economy, (it is also called command economy), all the resources (land, labour and capital) in the market are allocated by government, and it makes all the productive decisions, so, the centrally planned economy is a government-controlled economic situation. First, a centrally planned economy may choose to produce whatever the government decides is most crucial to meeting society's needs, the government should provide services and goods that can cater to the people's need. Like in the 19th and 20th centuries period, in China, Mao Zedong realized that China is under a low level of heavy industry, so he decided to develop it first, then the light industry, this decision is sensible and realistic. ...read more.

In order to make more profits, they will raise the price level; this action will cause affordability lack. When the government notices it, it has to print more paper money ---------this is a dangerous action because it may cause devaluation, inflation namely. Unemployment: when the government controls the market, it can give more job choice and benefits to the workers, but the free market is totally privatization, and the competition between every firm is strong, so this may make some workers lose their jobs and become unemployed. Income inequality: because of the differences of market forces. Growth of parallel markets: resulting from shortages. On the positive side Greater efficiency: if the government manages all of the resources in the market, it cannot allocate that fairly and rational,but in the free market, the individuals can use this power better. They can control their resources better, it can increase the efficiency. Wider competition: the firms can join the market freely. ...read more.

This essay engages at an okay level with the task, explaining the main characteristics of the two economies well. It's a shame to see the second part of the question answered so shortly, as there is plenty of scope for ...

This essay engages at an okay level with the task, explaining the main characteristics of the two economies well. It's a shame to see the second part of the question answered so shortly, as there is plenty of scope for discussion. I liked how they made a clear distinction between negative and positive effects, but there needed to be some further evaluation discussing which effects are more favourable and to what extent is each effect is significant.

The analysis in this essay is okay, but there is a distinct lack of technical terms. The first paragraph reeks poor quality. For example "that means no government interrupts" should be phrased as "government intervention is unlikely or absent completely". The explanation of a market is poor. If I were doing this essay I would be trying to explain the forces of demand and supply, and the market mechanism coming to an equilibrium price and quantity. This then results in incentives in various markets, causing entrepreneurship, etc. I say this essay has potential, as they are able to identify the key characteristics of each economy, it just isn't written in a sophisticated manner. There consequence of inflation is somewhat wrong. Inflation would be a consequence as command economies control the prices, whereas a market mechanism dictates prices in a free market economy. So, it is likely that demand will exceed supply and prices will rise.

This essay has a fine structure, but the quality of writing is poor. Words are often made up, for example "internation" or used completely in the wrong context "we can explain it in 3 expects". It's a shame, as there is okay analysis beyond these mistakes, but the numerous mistakes just detract from the content. This shows how crucial a strong, flowing, and clinical style is.