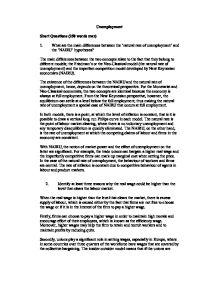 What are the main differences between the 'natural rate of unemployment' and the 'NAIRU' hypotheses?