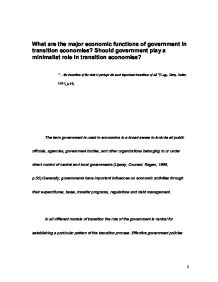 What are the major economic functions of government in transition economies? Should government play a minimalist role in transition economies? "...the transition of the state is perhaps the most important transitions of all."(Lago, Stern, Buiter, 1997, p.33) The term government is used in economics in a broad sense to include all public officials, agencies, government bodies, and other organizations belonging to or under direct control of central and local governments (Lipsey, Courant, Ragan, 1999, p.55).Generally, governments have important influences on economic activities through their expenditures, taxes, transfer programs, regulations and debt management. In all different models of transition the role of the government is central for establishing a particular pattern of the transition process. Effective government policies and intervention are vital and essential for successful transformation of the planned economies into a free market. Although, the end-point of transition for the Shock therapy is establishing of free market with minor government intervention, the key issues of this therapy such as: rapid reduction of the excess demand; swift, simultaneous external and domestic price liberalization; mass privatization and import of new market institutions, are seen as exclusively state responsibilities. In Gradualism, government provides basic macrostabilisation, sequences structural changes and price liberalization in the economy. ...read more.

Supervision and regulation of the banking system is a top government priority, as well. Inherited, undeveloped financial system could be serious obstacle to success of introducing transition reforms. Its reorganization, supervision and regulation are government main concern, as well. There has been a clear relationship between macroeconomic stability and economic performance in the transition economies. The countries that have shown the strongest commitment to reform are those that have kept tighter macroeconomic control (see Table 1 by N.Stern). Table 1.Progress in transition and macroeconomic performance Private Sector GDP share% Score on enterprise restructuring &privatization Score on markets' liberalization Score on Banking reform Score on Investment Laws Annual Inflation Rate% 1992 Annual Inflation Rate% 1996 GDP Growth% @1995 Advanced Countries 60 3.7 3.3 3 3 93 22 5 Intermediate Countries 42 2.7 2.8 2 2 237 28 0 Early Countries 27 2.0 2.3 1.8 2 1364 128 -5 Source: EBRD Working Paper 19, 1997 Thirdly, government provides the rule of law and order, basic administration and external defense. These responsibilities include the protection of the system of private property rights and contracts in a scale unknown for transition economies. Also they are basic to the functioning of a marked system based on decentralized, private decision -making (Stern, 1997, p.10).In particular, government should encourage institutional ...read more.

The composition of state activities should be consistent with its economic functions and marginal social benefits. The scope of government, in terms of how resources are allocated across different and often competing uses and functions, has to be in line with the increasing market orientation of the economy. Political economic determinants of the role of government also necessitate addressing. Government role could be directly influenced by powerful political interests. High levels of state capture5 are associated with weaker system of governance (see Table3, EBRD, Transition report 1999, p.121). Also, greater capture of the state has a powerful negative impact on the quality of governance in transition economies. Table3.State capture and Governance Source: EBRD Transition Report 1999 With increasing market orientation, the focus of the government in transition economy should have shifted from engaging in wide-ranging economic activities as under central planning to providing public goods and services, achieving society's distributive needs, ensuring macroeconomic stability, maintaining law ,order as well as fair competition and taxation-the classical, major economic functions of government. The size and scope of government should be balanced so that they integrate and harmonize the complementary functions of state and market. It should be also kept in mind that appropriate tasks for government in different transition economies vary, depending on initial conditions, economic structure, political circumstances, and cultural differences. ...read more.