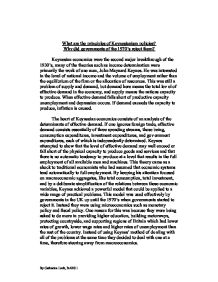 What are the principles of Keynesianism policies?Why did governments of the 1970&amp;#146;s reject them?

What are the principles of Keynesianism policies? Why did governments of the 1970's reject them? Keynesian economics were the second major breakthrough of the 1930's, many of the theories such as income determination were primarily the work of one man, John Maynard Keynes. He was interested in the level of national income and the volume of employment rather than the equilibrium of the firm or the allocation of resources. This was still a problem of supply and demand, but demand here means the total level of effective demand in the economy, and supply means the nations capacity to produce. When effective demand falls short of productive capacity unemployment and depression occurs. If demand exceeds the capacity to produce, inflation is caused. The heart of Keynesian economics consists of an analysis of the determinants of effective demand. If one ignores foreign trade, effective demand consists essentially of three spending streams, those being, consumption expenditures, investment expenditures, and government expenditures, each of which is independently determined. Keynes attempted to show that the level of effective demand may well exceed or fall short of the physical capacity to produce goods and services and that there is no automatic tendency to produce at a level that results in the full employment of all available men and machines. This theory came as a shock to traditional economists who had assumed that economic systems tend automatically to full employment. By keeping his attention focused on macroeconomic aggregates, like total consumption, total investment, and by a deliberate simplification of the relations between these economic variables, Keynes achieved a powerful model that could be applied to a wide range of practical problems. ...read more.

Another Keynesian principle is the anti-thrift doctrine. This paradox of thrift refers to how an increase in saving reduces production and employment. This supposedly works because a decrease in spending leads to a decrease in employment, as firms will not be selling as much therefore will have to make some workers redundant. With more people unemployed, there will be a decrease in spending as the people out of work will have less money, and again less spending will lead to more unemployment and so on. However as a result of what the Keynesians call the multiplier and accelerator effect, an increase in intended saving may result in a decrease in actual saving. Keynes was indeed opposed to saving. He considered saving to be of social harm, and advocated policies to encourage spending. In particular he argued that "up to the point where full employment prevails, the growth of capital depends not at all on a low prosperity to consume but is, on the contrary, held back by it" Keynes - General theory (1935) Keynes believed that to increase spending you had to increase government spending. However in order to do this the government spending would have to be increased through borrowing, rather than raising finance through tax increases, otherwise because of the increased tax, consumer spending would fall. For governments to spend to encourage consumer spending, Keynes believed it need not be wasteful, although Keynes thought that even wasteful government expenditure was better than none at all. ...read more.

Trade policy had to be used cautiously though so as not to cause retaliation by trading partners. However Keynes believed in free international trade without restrictions. Therefore the governments in the 1970's rejected his free trade policy, as they wanted to control the balance of payments. The Keynesian revolution was about overthrowing the doctrines of balanced budgets and sound money, and laissez-fairre economics, which became the principles and policies used in the 1970's by Edward Heath, Harold Wilson and Callaghan. Instead the doctrines of deficit spending, inflation and managed economy were the principles of Keynes. Keynesian economics starts with an understanding of the limitations of neoclassical economics, which is based on examining only one thing at a time. Keynesian economics attempts to understand an economy in which everything happens at once. During the 1970's the governments turned more towards neoclassical now known as microeconomics, because there were a lot of issues to deal with such as inflation, unemployment, international trade, and entering the European union. Therefore contrasting with the macroeconomics of Keynesianism they dealt with one problem at a time and applied new policies to deal with the issues. Another small reason why they rejected Keynesian policies may have been because some of the policies were not clear. " He should have explained more clearly what he wanted to say.... There is reason to believe that Keynes himself did not truly understand his own analysis."Quote - Samualson (1964) Therefore if many of his policies were not clear there is reason for the governments to reject them and use their own policies. Keynes - General theory (1935) Quote - Samualson (1964) ?? ?? ?? ?? By Catherine Lock, BABS 1 ...read more.