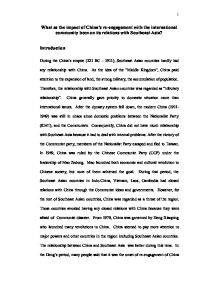 What as the impact of China's re-engagement with the international community been on its relations with Southeast Asia?

What as the impact of China's re-engagement with the international community been on its relations with Southeast Asia? Introduction During the China's empire (221 BC - 1911), Southeast Asian countries hardly had any relationship with China. As the idea of the "Middle Kingdom", China paid attention to the expansion of land, the strong military, the accumulation of population. Therefore, the relationship with Southeast Asian countries was regarded as "tributary relationship". China generally gave priority to domestic situation more than international issues. After the dynasty system fell down, the modern China (1911-1949) was still in chaos since domestic problems between the Nationalist Party (KMT), and the Communists. Consequently, China did not have much relationship with Southeast Asia because it had to deal with internal problems. After the victory of the Communist party, members of the Nationalist Party escaped and fled to Taiwan. In 1949, China was ruled by the Chinese Communist Party (CCP) under the leadership of Mao Zedong. Mao launched both economic and cultural revolution to Chinese society, but none of them achieved the goal. During that period, the Southeast Asian countries in Indo-China, Vietnam, Laos, Cambodia had closed relations with China through the Communist ideas and governments. However, for the rest of Southeast Asian countries, China was regarded as a threat of the region. Those countries avoided having any closed relations with China because they were afraid of Communist disaster. From 1978, China was governed by Deng Xiaoping who launched many revolutions to China. China seemed to pay more attention to major powers and other countries in the region including Southeast Asian countries. The relationship between China and Southeast Asia was better during this time. In the Deng's period, many people said that it was the onset of re-engagement of China to the world. However, in 1989, China had an infamous reputation especially for Human Rights because of the Tiananmen crisis. The relations of China and major powers particularly the United States fell down again. ...read more.

In the other word, resources in the South China Sea can be directly linked to the national China's interests and it can be regarded as a vitality for China's survival. Due to the fact that the South China Sea has been the main corridor for China's trade, principal gateway to the outside world and it also provides access to the economic heartlands of southern China (loc.cit: 189). Referring to its rights on the islands in the South China Sea, China may have problems with Southeast Asian countries in may areas. It can be made clear by Baviera's statement; ' The South China Sea disputes refer to conflicting territorial and maritime jurisdiction claims by China, Taiwan, Vietnam, the Philippines, Malaysia and Brunei over rocks, islands, reefs, water and resources of this ocean that connects China with Southeast Asia. At stake is not only sovereignty, but access to living resources (fisheries and aquatic plants and animals) and non -living resources (oil and other hydrocarbon deposits) in the ocean's water column seabed. Moreover, whoever has control of the South China Sea obtains considerable strategic influence over the Straits of Malacca and other crucial navigational chokepoints upon which the freedom of trade and military movement depend'.7 There are some example case studies for the Southeast Asian-China's conflicts over the South China Sea. First, the case study of conflicts between China and Vietnam, in 1974 , China used a military force against Vietnamese troops to enforce its claim to the Paracels. Then in 1988, the confrontation occurred between the Chinese and Vietnamese over the occupation of Fiery Cross Reef (Yung Shu Jiao), at which time the PRC sank three Vietnamese vessels, killing seventy-two people8. Moreover, 1997, China raised the stakes again by conducting oil and gas exploration drilling off central Vietnam in waters claimed by Hanoi (Umbach 2000: 179). Next, the second case study comes from the conflicts between China and the Philippines. ...read more.

Consequently, the South China Sea problems have been settled by the multilateral security under the ASEAN Regional Forum (ARF) which members are both ASEAN and major powers; for instance, the United States , Japan and Germany. The ARF has tried to balance the influence of China and the other powers in the region. However, China views that the ARF as its another step of multilateral cooperation in the world community. Nevertheless, the ARF seems to be unsuccessful in dealing with the regional conflicts due to the ASEAN way that limits the role of the ARF in settling problems. After the Asian economic crisis in 1997, Southeast Asian countries seems to have more closed relations with China because Japan was affected by this crisis and the United States was blamed by Southeast Asian nations that it was unwilling to help them. On the contrary, China was regarded as a mountaineer to sustain the economic of the region because it did not devalue the Yuan currency. It can be said that the re-engagement of China with the international community make it has better economic relations with Southeast Asian countries; however, as China can attract the Southeast Asian countries must find their own strategies to welcome the investors. For the security cooperation, China and ASEAN have been cooperate under the ARF. However, the ARF have been quite unsuccessful in dealing with problems in the region. For its effectiveness, the ARF should find more suitable way in order to maintain the status quo of the region and reduce the conflicts between members particularly the South China Sea conflicts that have undermined security relations between China and Southeast Asian countries. 1 Most information in the part of historical background of China is from http://www.asterius.com/china/ 2 The idea was to mobilize the peasant masses to increase crop production by collectivizing the farms and use the excess labor to produce steel. 3 For more information, see http://www.aseansec.org/13125.htm. 4 ibid. 5 ibid. 6 See more from http://www.middlebury.edu/SouthChinaSea/why.html 7 http://pascn.pids.gov.ph/DiscList/d99/s99-17.pdf 8 See http://www.middlebury.edu/SouthChinaSea/why.html 9 From http://www.ndcp.edu.ph/ppapers/ARFinthe21stcen.htm. 10 From http://www.allied-co.com/ri/ri/003030340.html 1 ...read more.