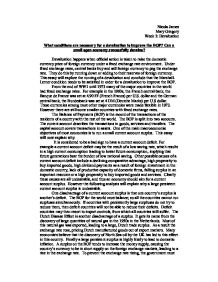 What conditions are necessary for a devaluation to improve the BOP? Can a small open economy successfully devalue?

Nicola James Mary Gregory Week 2: Devaluation What conditions are necessary for a devaluation to improve the BOP? Can a small open economy successfully devalue? Devaluation happens when official action is taken to raise the domestic currency price of foreign currency under a fixed exchange rate environment. Under fixed exchange rates, central banks buy and sell foreign currency to peg the exchange rate. They do this by running down or adding to their reserves of foreign currency. This essay will explore the running of a devaluation and conclude that the Marshall-Lerner condition needs to be satisfied in order for a devaluation to improve the BOP. From the end of WW1 until 1973 many of the major countries in the world had fixed exchange rates. For example in the 1960s, the French central bank, the Banque de France was set at 4.90 FF (French Francs) per U.S. dollar and the German central bank, the Bundesbank was set at 4 DM (Deutche Marks) per U.S dollar. These currencies among most other major currencies were made flexible in 1973. However there are still some smaller countries with fixed exchange rates. The Balance of Payments (BOP) is the record of the transactions of the residents of a country with the rest of the world. ...read more.

If they were exactly equal to 1, then the BOP would be unchanged by a devaluation. If they were less than 1, then the BOP would have adverse affects. Nevertheless this condition is likely to be only satisfied in the median term. In the short-term the 'J-curve' affect may be observed. A diagram (Diagram 1) of the J-curve is shown below. It shows the impact of devaluation over time. It gets its name from the shape of the curve. Assume initially that the current account is in deficit, and as a result at time X the government decides that a devaluation should be implemented to correct this deficit. The immediate time period after a devaluation shows the current account deficit worsening, before the devaluation takes affect and the 'J' is fully painted. The J-curve effect was observed following Britain's exit from the Exchange Rate Mechanism (ERM) in 1992, where the current-account worsened initially before improving after approximately 18 months. The reasons for this short-term worsening will now be explored. Following the devaluation exporters may seek to expand production, in order to meet the increase in export demand. However since supply is relatively inelastic in the short-term, output may not expand greatly at first. ...read more.

- government tends to reassure the public that devaluations won't occur - preventing devaluation. However when a devaluation becomes necessary the government official's look foolish - and therefore another reason why they delay too long. Overall government's should bear all this analysis in mind, they should assess the elasticities of import and export demand to test the likelihood that the Marshall Lerner condition will hold. They should combine both expenditure reducing policies with the expenditure switching devaluation, in order to achieve both an external and internal balance. They should also avoid inflation. Open economies are economies that trade with others. Being open involves having trade and finance linkages with other economies. The countries in the world that currently have fixed exchange rates are all relatively small. It is natural to think that small economies actions won't affect the economy much, and therefore a devaluation will be unsuccessful. However many small economies specialise in a certain good or service, and therefore their actions will effect the world's prices and outputs in that commodity, which will then impact on the prices of the rest of the goods in that economy. In conclusion small open economies are able to successfully devalue their currency. This is not to say that all small open economies will be successful upon implementation. The above analysis of the Marshall Lerner Condition and the Internal-External Balance still applies. ...read more.