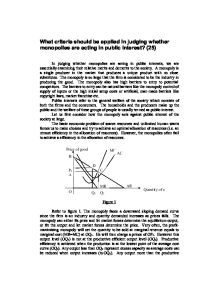 What criteria should be applied in judging whether monopolies are acting in public interest? (25)

What criteria should be applied in judging whether monopolies are acting in public interest? (25) In judging whether monopolies are acting in public interests, we are essentially examining their relative merits and demerits to the society. A monopoly is a single producer in the market that produces a unique product with no close substitutes. The monopoly is so large that the firm is considered to be the industry in producing the good. The monopoly also has high barriers to entry to potential competitors. The barriers to entry can be natural barriers like the monopoly control of supply of inputs or the high initial setup costs or artificial, man-made barriers like copyright laws, market franchise etc. Public interests refer to the general welfare of the society which consists of both the firms and the consumers. The households and the producers make up the public and the welfare of these groups of people is usually termed as public interest. Let us first consider how the monopoly acts against public interest of the society at large. The basic economic problem of scarce resources and unlimited human wants forces us to make choices and try to achieve an optimal allocation of resources (i.e. ...read more.

the rich should not gain at the expense of the poor). However, if the loss in consumers' surplus is recovered by the gain in the producers' surplus, the total welfare loss is zero. Because the surplus is merely transferred from the consumers to the producers, there is no net loss (i.e. the society utilisation of resources remain unchanged). However, this does not happen unfortunately, because part of the loss in consumer surplus is not recovered by the gain in producers' surplus. This will bring about allocative inefficiency in the production of the good. Figure 2 Allocative efficiency occurs when price, P=MC, marginal cost. When P=MC, the marginal valuation of the society on the unit of the good consumed is equal to the marginal cost in producing the good. This mean that the marginal social benefit (MSB) is equal to the marginal social cost (MSC) in terms of alternative goods foregone. Since MSB=MSC, there is efficient allocation of resources as resources are channeled into producing goods that the society wants. Society welfare is maximised and Pareto optimality is reached. However the monopoly pricing decision lead to a welfare loss shown by the shaded triangle in figure 2. ...read more.

is greater than the loss (CDE). This is especially important in the provision of essential items like water and electricity. Left to the perfectly competitive firm, the firm may not want to go into production since it cannot practice price discrimination. However since the monopoly can practice price discrimination, such 'loss making' services can still be provided and the society can still enjoy the consumption of such good thereby increasing' society's level of satisfaction and promoting public interests. Also, if the monopoly can practice MC pricing due to price discrimination, allocative efficiency will be achieved since price equals marginal costs. Lastly, price discrimination can allow monopolies to charge a lower price to the poor and a higher price to the rich. Hence, the poor who previously cannot afford can now afford to buy the good. This will serve to allocate goods to all people of different incomes thereby promoting social equity and enhancing public interest. In conclusion, monopolies can act against or in public interest because of its ability to set either price or quantity sold. Its unique pricing and output decision can either seek to maximise social welfare and achieve pareto optimality or create deadweight losses and cost inefficiencies which will reduce the well-being of the society. ...read more.