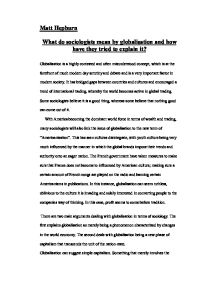 What do sociologists mean by globalisation and how have they tried to explain it?

Matt Hepburn What do sociologists mean by globalisation and how have they tried to explain it? Globalisation is a highly contested and often misunderstood concept, which is at the forefront of much modern day scrutiny and debate and is a very important factor in modern society. It has bridged gaps between countries and cultures and encouraged a trend of international trading, whereby the world becomes active in global trading. Some sociologists believe it is a good thing, whereas some believe that nothing good can come out of it. With America becoming the dominant world force in terms of wealth and trading, many sociologists will also link the issue of globalisation to the new term of "Americanisation". This has seen cultures disintegrate, with youth culture being very much influenced by the manner in which the global brands impose their trends and authority onto an eager nation. The French government have taken measures to make sure that France does not become to influenced by American culture; making sure a certain amount of French songs are played on the radio and banning certain Americanisms in publications. ...read more.

He believes that the multinational companies are the "Transitional Capitalist Companies". They have the power and the wealth to exploit these countries as much as they want, as the developing countries are merely struggling to lift themselves from their own pits of depravity. This is where issues such as labour exploitation come into the equation. A fully functioning global company setting up business in the third world will always look to keep labour costs down, by exploiting the under-qualified workforce, who would not know of the sort of wages they should be asking for. They believe that globalisation will have limited benefits for third world countries, until they cut off all ties with the Western world. This is due to their being a feeling of dependency, by which the third world is not developing at a natural rate, but is merely feeding off investment and interest show in its own country. ...read more.

The debt which third world countries have built up means that the Third World is in full control of the smaller countries and such deprived countries will continue to owe them. All the while the global philosophy of happiness and wealth in the world is being preached, despite its obvious flaws. There are blatant arguments for and against the use of such ruthless globalisation techniques being used in the business world. The impact it can have on developing countries is immense. It can create so many jobs and revamp areas dramatically, while at the same time acting as an exploiting foreign concept, that is completely out of touch with the traditional surroundings of its new habitat. Sociologists talk of globalisation as being a huge world power, something that has spread quickly across the globe, bridging gaps in world communication. People are interacting across the world on a daily basis about business deals and opportunities and as such, a global market has been created. Whether or not this is a positive concept is still being debated. ...read more.