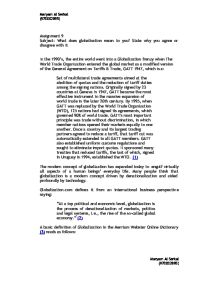 What does globalisation mean to you? State why you agree or disagree with it

Assignment 9 Subject: What does globalisation mean to you? State why you agree or disagree with it In the 1990's, the entire world went into a Globalization frenzy when The World Trade Organization entered the global market as a modified version of the General Agreement on Tariffs & Trade, GATT 1947, which is a: Set of multilateral trade agreements aimed at the abolition of quotas and the reduction of tariff duties among the signing nations. Originally signed by 23 countries at Geneva in 1947, GATT became the most effective instrument in the massive expansion of world trade in the later 20th century. By 1995, when GATT was replaced by the World Trade Organization (WTO), 125 nations had signed its agreements, which governed 90% of world trade. GATT's most important principle was trade without discrimination, in which member nations opened their markets equally to one another. Once a country and its largest trading partners agreed to reduce a tariff, that tariff cut was automatically extended to all GATT members. GATT also established uniform customs regulations and sought to eliminate import quotas. ...read more.

Karl Kraus, an Austrian satirist, who lived and died before the time of GATT 1947, has written a very enlighten quote on Progress which is also appropriate for Globalization in its current form: Progress celebrates victories over nature. Progress makes purses out of human skin. When people were travelling in mail coaches, the world got ahead better than it does now that salesmen fly through the air. What good is speed if the brain has oozed out on the way? How will the heirs of this age be taught the most basic motions that are necessary to activate the most complicated machines? Nature can rely on progress; it will avenge it for the outrage it has perpetrated on it. Progress, under whose feet the grass mourns and the forest turns into paper from which newspaper plants grow, has subordinated the purpose of life to the means of subsistence and turned us into the nuts and bolts for our tools. (6) Resources: (1) Encyclopaedia Britannica http://www.britannica.com/ebc/article?tocId=9365377&query=GATT&ct= (2) Globalization.com - Introduction to Globalization http://www.globalization.com/intro.cfm (3) Merriam-Webster Online http://www.m-w.com/cgi-bin/dictionary?book=Dictionary&va=globalization (4) Qur'an Chapter 49: Al-Hujraat (The Private Apartments, The Inner Chambers) http://www.usc.edu/dept/MSA/quran/049.qmt.html (5) Is the World Trade Organizationa a blessing or a curse? http://www.sfgate.com/cgi-bin/article.cgi?file=/chronicle/archive/1999/11/29/ED68118.DTL (6) Literary Encyclopaedia: Kraus, Karl http://www.litencyc.com/php/speople.php?rec=true&UID=5411 Maryam Al Serkal (970002895) Maryam Al Serkal (970002895) ...read more.