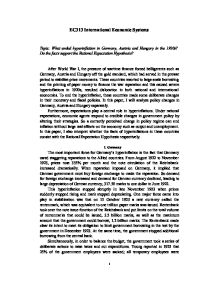 What ended hyperinflation in Germany, Austria and Hungary in the 1920s? Do the facts support the Rational Expectation Hypothesis?

EC313 International Economic Systems Topic: What ended hyperinflation in Germany, Austria and Hungary in the 1920s? Do the facts support the Rational Expectation Hypothesis? After World War I, the pressure of wartime finance forced belligerents such as Germany, Austria and Hungary off the gold standard, which had served in the prewar period to stabilize price movements. These countries resorted to large-scale borrowing and the printing of paper money to finance the war reparation and this caused severe hyperinflations in 1920s, resulted dislocation in both national and international economies. To end the hyperinflation, these countries made some deliberate changes in their monetary and fiscal policies. In this paper, I will analyze policy changes in Germany, Austria and Hungary separately. Furthermore, expectations play a central role in hyperinflations. Under rational expectations, economic agents respond to credible changes in government policy by altering their strategies. So a correctly perceived change in policy regime can end inflation without large real effects on the economy such as output and unemployment. In this paper, I also interpret whether the facts of hyperinflations in these countries consist with the Rational Expectation Hypothesis respectively. I. Germany The most important force for Germany's hyperinflation is the fact that Germany owed staggering reparations to the Allied countries. From August 1922 to November 1923, prices rose 355% per month and the note circulation of the Reichsbank increased dramatically. ...read more.

The central bank was forbidden for lending to the government except on the security of an equal amount of gold and foreign assets. Note issues of the bank were backed by minimal proportions of gold, foreign assets and commercial bills. Furthermore, the bank was obligated to resume convertibility into gold once the government's debt reduced to 30 million gold crowns. The new currency schilling, which is equal to ten thousand paper crowns, was introduced at the end of 1924. Moreover, there was a commissioner general from the Council of the League of Nations to monitor Austria's commitments for financial reconstruction. The Reparation Commission also modified its claim on the government resource of Austria. Other than these monetary reforms, balanced budget was achieved by several actions within two years. Like the Germans, thousands of government employees were discharged to reduce expenditures. Prices of government-sold goods and services were raised to reduce deficits of government enterprises. New taxes were introduced and the power of government to collect taxes was much stronger. Figure 2 shows that the stabilization of crown was accompanied by a drastic increase in the unemployment rate, although the unemployment rate already started to increase before the stabilization. The number of unemployment benefits claims increased dramatically after the termination of the hyperinflation, from 38000 in October 1922 to 117000 in January 1923. ...read more.