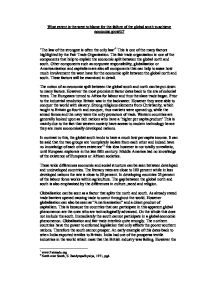 What extent is the west to blame for the failure of the global south to achieve economic growth?

What extent is the west to blame for the failure of the global south to achieve economic growth? 'The law of the strongest is often the only law'1 This is one of the many factors highlighted by the Fair Trade Organisation. The fair trade organisation is one of the components that help to explain the economic split between the global north and south. Other components such as corporate responsibility, globalisation or Americanisation and capitalism are also all components that can help to a***s how much involvement the west have for the economic split between the global north and south. These factors will be examined in detail. The notion of an economic spilt between the global south and north can be put down to many factors. However the most prominent factor dates back to the era of colonial times. The Europeans turned to Africa for labour and thus the slave trade began. Prior to the industrial revolution Britain was in the backwater. However they were able to conquer the world with slavery. Strong religious elements from Christianity, which taught to Britain go fourth and conquer, thus markets were opened up, while the armed forces and the navy were the only protectors of trade. Western countries are generally looked upon as rich nations who have a 'higher per capita product' This is mainly due to the fact that western society have access to modern technology hence they are more economically developed nations. In contrast to this, the global south tends to have a much low per capita income. It can be said that the two groups are 'completely isolate from each other and indeed have no knowledge of each others existence'2 this idea however is not totally unrealistic, until European explorers in the late fifth century. ...read more.

This seems like a clear violation on the people of the south that the west feel they can get a way with. This therefore shows that if the west does nothing to prevent problems in the south, and that they are very responsible for the economic disparity within the global South. The way in which the gap must be bridged in order to do this to provide them with food to get ride of hunger and malnutrition, give them access to birth control methods which will help solve the problem of an increasing population, rich countries could help by providing their governments with information and research and contraception. They need to introduce educational and technical training so the developing nations can adopt scientific and technological methods of production. However just giving food isn't the best answer. It only provides a short-term solution. If food is sent it will put the local farmers out of business. If money is sent such as Live Aid it will not actually solve any problem. This is because Ethiopia didn't actually have a food shortage problem, as a pose to the fact that their land was being used for agriculture to export, and they couldn't afford to by food on the international market. This again highlights how the west trivialise the southern issues and prevents them form entering the global trade phenomenon. In 1967 the US had 187 parent companies, which were responsible for three quarter of all investment from the US. They had 2600 subsidiaries in underdeveloped countries such as Latin America, Africa and Asia. The activities that were undertaken where manufacturing and the extraction of raw materials. ...read more.

However much the governments and corporation and nations try to defend and justify their action, they have had a direct negative impact on the global southern society. According to the fair trade organisation 'Everyone has a right to a decent existence. Irrespective of the colour of their skin, their origins and the country in which they live.'7 This is Cleary not what is happening in the world today. From the evidence stated, it can be stated that western society defiantly have had a huge direct impact on the poor economic growth of the global south. However the indirect impact on the southern economies is even greater. Through the western countries impact on southern countries health and working condition, they have had a direct impact on the southern countries infrastructure, and thus there economies. Across the globe from India to Africa to Latin America, these countries have been countries with natural resources and the potential to prosper economically. However whether it can be seen as the continuous bombardment of white superiority or simply the strong taking advantage of the weak, these prosperous lands and people have been dredged down. It can therefore be concluded that the west has had a tremendous negative impact on the economies of the global southern countries. The US is the global power of the world. The extreme capitalist agenda of the American governments has ensured that they are kept at the top, regardless of how there decisions affect the rest of the world. 1 www.Fairtrade.org 2 North over South, S. Bandyopadhyaiya, 1971, pg4 3 Rise to Globalism, Stephen E. Ambrose and Douglas G. Brinkley, 1971, pg96 4 Urban policy, Hisch and Mohl,1993,pg97 5 American Empire, Andrew J. Bacevich, 2002, pg 20 6 Rise to Globalism, Stephen E. Ambrose and Douglas G. Brinkley, 2002, pg34 7 www.fairtrade.org ...read more.