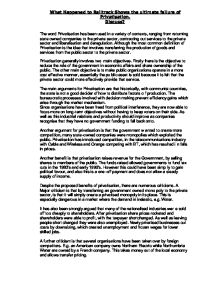 What Happened to Railtrack Shows the ultimate failure of Privatisation.

What Happened to Railtrack Shows the ultimate failure of Privatisation. Discuss? The word Privatisation has been used in a variety of contexts, ranging from returning state owned companies to the private sector, contracting out services to the private sector and liberalisation and deregulation. Although the most common definition of Privatisation is the idea that involves transferring the production of goods and services from the public sector to the private sector. Privatisation generally involves two main objectives. Firstly there is the objective to reduce the role of the government in economic affairs and share ownership of the public. The other main objective is to make public organizations operate in a more cost effective manner, essentially the public asset is sold because it is felt that the private sector could more effectively provide that service. The main arguments for Privatisation are that historically, with communist countries, the state is not a good decider of how to distribute factors of production. The bureaucratic processes involved with decision making prevent efficiency gains which arise through the market mechanism. ...read more.

A further criticism is that several organisations have been taken over by foreign competitors. E.g. an American company owns Northern Electric while Northumbria Water are owned by a French company. This takes money out of the local economy and allows transfer pricing. The main case that will be focused upon in this argument is the failed privatisation of Railtrack in1996. Railtrack PLC was formed in 1994 to be the custodian of Britain's railway infrastructure. As well as the running and upkeep of track, signals, stations, depots, arches, bridges and viaducts, the company has one of the country's largest property portfolios, including over 40,000 commercial property units and thousands of hectares of land. Firstly, it is worth saying that, in theory, the privatization of the rail industry in 1996 wasn't necessarily a bad idea. British Rail was hardly doing an acceptable job of running the railways. Efficiency was non-existent, investment was kept to a minimum, and trains were just as late and just as untidy. ...read more.

It has had to make big penalty payments for poor reliability. In conclusion to this argument, Railtracks case does not show the ultimate failure of Privatisation. My opinion is that Railtrack is one example of fussy management and greed which then led to the failure of Privatisation, however the process itself was not at fault. There are many other examples of where Privatisation has worked well, these include BT (1984), British Gas (1986), British Airways (1987). Privatisation it seems only works well in industries with less regulation, which have the potential to work more efficiently with less interference. However some industries are regulated because they have the potential to exploit the customer, these industries would be more difficult and dangerous to privatise. Privatisation depends on the right set of internal and external factors to work successfully. Good management, workers, communication and motivation are essential as well as external factors such as the amount of help from the government to get it underway, the competition in the new private market, the customer response to the new system. Without these key factors to drive the process of privatisation, then it maybe unsuccessful, and this is simply what happened with Railtrack. ...read more.