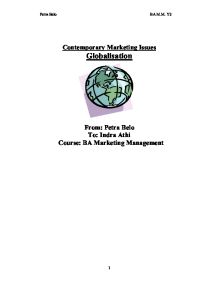 What's the definition of Globalisation?

Contemporary Marketing Issues Globalisation From: Petra Belo To: Indra Athi Course: BA Marketing Management What's the definition of Globalisation? Globalisation is a term that is frequently used but hardly ever defined. It refers to the rapid increase in the share of economic activity taking place across national boundaries. This goes beyond the international trade in goods and includes the way those goods are produced, the delivery and sale of services, and the movement of capital. Globalisation it is also an idea of our time, highly contested and widely accepted at the same time. It relates to the economy, politics, culture, society, and generally, with everything we deal with in our everyday lives. Can be thought of as a process, in which economic markets, technologies, and communications gradually can to exhibit more "global" characteristics, and less "national" or "local" ones. In this scene, it is the millions of daily decisions concerning technology choices, market structure, and communication patterns that "drive" the globalisation process. In altering these patterns, globalisation will generate a variety of consequences, both for the world as a whole, and for individual countries. These consequences will be both economic and environmental in nature. Introduction Held et al (1999) separate the theorists of globalisation into three different schools the hyperglobalisers, the sceptics and the transformation lists. ...read more.

European Commission officials thought that audiovisual production in Europe would benefit if market barriers were lowered, since that would bring economies of scale in the European market. In addition to this the raised demand for programming would be satisfied by an inter-European exchange that would be competitive with US imports. Threat or opportunity... Globalisation can be a force for good. It has the potential to generate wealth and improve living standards. But it isn't doing that well at the moment. The benefits from increased trade, investment, and technological innovation are not fairly distributed. The experience of the international trade union movement suggests that the reality for the majority of the world's population is that things are getting worse. Globalisation is increasing the gap between rich and poor. This is because the policies that drive the globalisation process are largely focussed on the needs of business. The relentless drive to liberalise trade i.e. to remove trade barriers, promote privatisation, and reduce regulation (including legal protection for workers), has had a negative impact on the lives of millions of people around the world. In addition, many of the poorer countries have been pressured to orientate their economies towards producing exports and to reduce already inadequate spending on public services such as health and education so that they can repay their foreign debt. ...read more.

Demands support fair and transparent world trade and the removal of trade barriers, but on the basis that social concerns are not neglected. A lot more needs to be done to promote development in non-industrialised countries and to eliminate poverty. The is a need to request: 1. Debt relief 2. Increased aid 3. Fair trade terms 4. Protection for public services 5. Access to essential medicines such as HIV/AIDS treatment 6. Capacity building and assistance with international trade negotiation 7. Reform of the WTO, World Bank and IMF so that there is greater transparency and democracy within their operations 8. Respect fundamental workers' rights Conclusion Core labour standards form the basic building blocks of democracy and are crucial to the empowerment of people, particularly those who are impoverished and marginalised. Freedom of association, the right to effective collective bargaining, freedom from forced and child labour, and freedom from discrimination are basic human rights that help people to break out of the poverty trap. These must be respected and not violated in the name of international trade. Consequently, there has to be co-ordination and co-operation between the WTO and the International Labour Organisation (ILO) to ensure that trade rules and policies do not continue to undermine labour standards. A number of developing countries have expressed concern about labour standards being used for protectionist purposes i.e. to protect jobs in industrialised countries and to reduce the competitiveness of developing countries. ...read more.