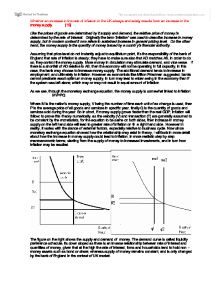 Whether an increase in the rate of inflation in the UK always and solely results from an increase in the money supply. [15] Like the prices of goods are determined by it supply and demand, the relative price of money is determined by the rate of interest. Originally the term 'inflation' was used to describe increase in money supply, but in modern context it now refers to sustained increase in general pricing level. On the other hand, the money supply is the quantity of money issued by a country's financial authority. Assuming that price level do not instantly adjust to equilibrium point, it's the responsibility of the bank of England that rate of inflation is steady; they have to make sure also that AD matches AS, in order to do so, they control the money supply. More money in circulation may stimulate demand, and vice verse. If there is a shortfall of AD relative to AS, then the economy will not be operating in full capacity, in this case, the bank may choose to increase money supply. The additional demand tends to increase in employment, and ultimately to inflation. However as economists like Milton Friedman suggested, banks cannot predicate exact optimum money supply, in turn may lead to wider swing in the economy than if the system was left alone; which may or may not result in equal amount of inflation. ...read more.

However, the above are all derived on the bases that there is one market for money and only one equilibrium rate of interest within the economy; though in actuality, there are many markets for money and many rates of interest in economy such as one in the UK currently, due to the existence of high street banks partly. For example, banks lend each other at far lower rate than they do to normal borrower, as a result of less of relatively lower risks in the former. If all the markets were perfect, and all loans and borrowing were exactly same, the rate of interest would be the same always, but that's far from reality, due quite to simples modeling. Store of wealth may take many forms, there are just two official UK measure of money supply, the narrow and broad money; unlike the former, and the latter is less easily affected by the monetary policy. For that reason, I will be using M4 mainly for comparison. Looking at the graphs of M4 money growth of the last 10 years (second graph), and comparing it to that of CPI and RPI of the UK economy, there are definitely some resemblances between the trends in both graphs. ...read more.

Not to mention that consumer behaviour is far less linear than the theories suggest. As seen on the graph, the CPI inflation appear to be much lower through the course of the last decade than RPI, which somewhat let us to question whether CPI is not as effective/realistic measure of inflation, or just easy scheme came up by the Labours government to meet inflation target of 2.0%; either way if in the question, the inflation is defined as RPI inflation, then I think that increase in money supply seem to have more sole effects than if CPI is used. I think that if I might have been able to find an RPIx graph, it would have been more helpful. In the recent years, the government appear to utilise monetary measures over fiscal policies, looking at the current economic stance, of zero/negative GDP growth, and 4.7% of CPI inflation, one could argue that the monetary measures can only be so effective, and at the end of the day, due to lack of economic models, government may have to utilise more policies (ie: fiscal) at the same time frequently to intervene in order to achieve maximum economic as well as private and social benefit. ?? ?? ?? ?? ...read more.