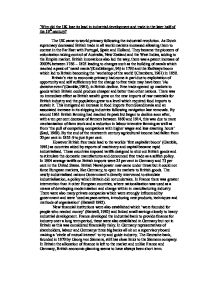 Why did the UK lose its lead in industrial development and trade in the later half of the 19th century?

`Why did the UK lose its lead in industrial development and trade in the later half of the 19th century? The UK came to world primacy following the industrial revolution. As Dutch supremacy decreased British trade in all world markets increased allowing them to contest in the Far East with Portugal, Spain and Holland. They became the pioneers of colonisation taking control of Australia, New Zealand and the West Indies, adding to the Empire market. British innovations also led the way, there was a patent increase of 2000% between 1766 - 1825 leading to changes such as the building of canals which reached a peak of 'canal mania'(Kindleberger, 96) in 1793 and the Railways boom which led to Britain becoming the 'workshop of the world'(Chambers, 1961) in 1850. Britain's rise to economic primacy had come in part due to exploitation of opportunity and self sufficiency but the change to free trade may have been 'the decisive event'(Gamble,1981), in British decline. Free trade opened up markets to goods which Britain could produce cheaper and better than other nations. There was no immediate effect as British wealth grew on the new imports of raw materials for British industry and the population grew to a level which required food imports to sustain it. This instigated an increase in food imports from Scandinavia and an associated increase in its shipping industries following navigation law removals. ...read more.

World War 1 saw Britain spending 25 - 30 per cent of its gross national product on the war effort putting strain on the national economy. The return to the gold standard in 1926 saw the value of the pound raised against the dollar which led to the virtual collapse of British export industries like coal and shipbuilding well before the great depression. British decline can also be attributed to its huge decline in the manufactures industry as 'manufacturing is the key to the modernisation of the economy' (Eatwell, 1982). Manufactures provide 'unlimited scope for technical change' (Eatwell, 1982) as change leads to development which should again lead to change but in all sectors such as agriculture and services. Manufacturing industry should be able to 'satisfy the demands of the consumers at home' as well as being able to 'sell enough of its products abroad to pay for the nations import requirement' (Coates, 1994). During the industrial revolution British industry strode ahead as bottlenecks were overcome by British invention, however as the nineteenth century drew to a close British entrepreneurs 'waited for them to be solved by someone else' (Kindleberger, 1996) as 'institutions will adapt when it is cheap and easy, not when it is expensive and difficult' (Kindleberger, 1996). British heavy industries began to fall behind after 1870, between 1871 and 1885 British percentage growth in manufacture was 0.6 compared to 1.7 in Germany and 2.7 in the US. ...read more.

The industrial revolution set Britain ahead as the first industrial nation but this also provides a disadvantage, as technology spread other countries began to industrialise and modernise more than Britain as it was cheaper to use the most modern technology from the start not to replace and renovate. This lead to better and cheaper products being produced abroad so that '"made in Germany" proved to be a mark of quality' (Kindelberger, 1996). France and Germany established financial systems to stimulate industry and so began to increase their share of world exports at British expense. Britain also lost out as other countries imposed tariffs to block British goods which cut Britain out of the fast growing European and U.S markets. British industry soon started to lack the innovation that had driven the industrial revolution and change became slow as the US and Germany pushed forward in industrial innovation and new technology like chemical dyes. The Boer war saw Britain secure its Indian trade routes but at a cost as the empire took its toll on British finances. The First World War saw Britain slipping out of economic primacy as its export industries crumbled following a return to the gold standard, further sterling devaluations would see Britain fall behind further after the Second World War. ...read more.