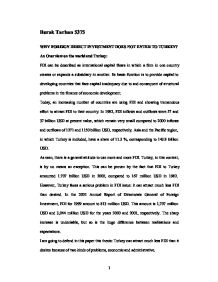 Why foreign direct investment does not enter to Turkey.

Burak Tarhan 5375 WHY FOREIGN DIRECT INVESTMENT DOES NOT ENTER TO TURKEY? An Overview on the world and Turkey: FDI can be described as international capital flows in which a firm in one country creates or expands a subsidiary in another. Its basic function is to provide capital to developing countries that face capital inadequacy due to and consequent of structural problems in the finance of economic development. Today, an increasing number of countries are using FDI and showing tremendous effort to attract FDI to their country. In 1982, FDI inflows and outflows were 57 and 37 billion USD at present value, which remain very small compared to 2000 inflows and outflows of 1271 and 1150 billion USD, respectively. Asia and the Pacific region, in which Turkey is included, have a share of 11.3 %, corresponding to 143.8 billion USD. As seen, there is a general attitude to use more and more FDI. Turkey, in this context, is by no means an exception. This can be proven by the fact that FDI to Turkey amounted 1.707 billion USD in 2000, compared to 167 million USD in 1982. However, Turkey faces a serious problem in FDI issue: it can attract much less FDI than desired. In the 2001 Annual Report of Directorate General of Foreign Investment, FDI for 1999 amount to 813 million USD. This amount is 1,707 million USD and 3,044 million USD for the years 2000 and 2001, respectively. ...read more.

If this is the case, then is Turkey a country where corruption is widespread? Unfortunately, the answer to this question is "Yes". In the West Europe and North America section of "Global Corruption Report 2001" published by Transparency International, the following statement can be found: "Turkey, where democracy is fragile, has set about the task of tackling corruption but, as was evident in its 2001 economic crisis, it has a long way to go." From here, one can clearly understand that corruption is existent and is a factor in preventing foreign investors from investing in Turkey. To summarize, one can show high inflation, absence of inflation accounting, not implementing the taken economic decisions and corruption. These problems are deterring foreigners from investing in Turkey. However, it is hard to say that these are the only factors that lead Turkey to attract much less FDI than expected. On the other hand, a number of administrative problems, which I am going to mention now, accompany these economic problems. Administrative Problems The presence of administrative problems can probably best be documented by the principle decision to adopt "The Program to Improve the Investment Environment in Turkey" by the Turkish government. This detailed program entails various administrative problems for foreign investors and suggestions for their solutions. One of these administrative problems, according to this report, is long and repetitive bureaucratic operations. For example, if a foreign investor wants to establish a standard company in Turkey, he has to go through 19 stages, which last at least 2.5 months. ...read more.

Conclusion: How can Turkey attract more FDI? If Turkey wants to persuade more foreign economic agents to invest in Turkey, it has to reduce the current high inflation. The reason is that the entrepreneurs will have to provide inputs at higher prices than the prices necessary to protect purchasing power, if they want to go on with production. Thus, they will have to sell their goods at higher prices, compared to prices of other countries. When this occurs, the foreign entrepreneur will be able to sell his goods only in Turkey and his business will not expand beyond a certain extent. Seeing these, the investor will probably prefer initially to invest in countries other than Turkey, provided that high inflation exists in the future. Another action Turkey must take is to get rid of corruption. A number of steps have been taken in order to reach this goal, such as relatively quick legal action against people who are accused or convicted of corruption. However, a lot of things also need to be done, such as the reorganization of the salaries of public personnel and the establishment of a new evaluation system of this personnel's performance. This will not only prevent corruption, but also will make it impossible to repeat the mistakes in the past. Turkey must, in addition, must urgently reconsider the bureaucratic operations it requires from foreign investors eliminate the repetitive and unnecessary operations. This will be mutually beneficial. The state will have relieved itself from checking whether unnecessary procedures have been completed, whereas the entrepreneur will be able to concentrate on his future investment and possible success more. 1 1 ...read more.