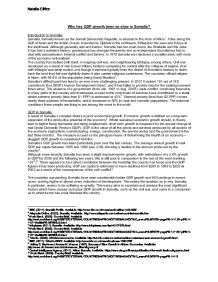 Why has GDP growth been so slow in Somalia?

Why has GDP growth been so slow in Somalia? Introduction to Somalia: Somalia, formerly known as the Somali Democratic Republic, is situated in the Horn of Africa1. It lies along the Gulf of Aden and the Indian Ocean, bounded by Djibouti in the northwest, Ethiopia in the west and Kenya in the southwest. Although generally arid and barren, Somalia has two main rivers; the Shebelle and the Juba. It has had a turbulent history; governance has changed frequently and an independent Somalia has had to deal with assassination, internal conflict and famine. In 1970 Somalia was declared a socialist state, with most of the economy nationalised. The country has battled both itself, in ongoing civil war, and neighbouring Ethiopia, among others. Civil war developed as a result of clan based military factions competing for control after the collapse of regime; War with Ethiopia was deep-rooted, and though it stemmed greatly from the desire of Somalia's leaders to claim back the land they felt was rightfully theirs, it also carried religious undertones. The countries' official religion is Islam, with 99.8% of the population being Sunni Muslims2. Somalia's difficult past has lead to an ever more challenging present. In 2001 it ranked 161 out of 163 countries in the UNDP's Human Development Index3, and it has failed to provide data for the rankings several times since. The absence of a government (from Jan. 1991 to Aug. 20004), state conflict, continuing insecurity in many parts of the country and inadequate access to the most basic of services have contributed to a state where extreme poverty (less than $1 PPP) is estimated at 43%5. General poverty (less than $2 PPP) covers nearly three quarters of households, and is increased to 80% in rural and nomadic populations. The extreme conditions these people are living in are among the worst in the world. GDP in Somalia: A result of Somalia's complex history is poor economical growth. ...read more.

This sort of behaviour is incompatible with running a modern state. The other reason behind Somalia's fighting is their General, Siad Barre. He came to power in 1969 and it wasn't long before his dictatorship showed the tyrant he was. Soon after taking control, General Barre started playing on the people's emotions by invoking Somali Nationalism and the returning of the missing Somali territories46. He pursued this irredentist development while neglecting domestic issues. In 1977 Somali army units crossed the border of Ethiopia, waging war with the country. War was unsuccessful for the Somali, with Ethiopia regaining all its territory by 1978. Soon after, the General faced a huge failure in his dominant policy. As both his national construction and development policy, which was based on greater Somalia, slowly came to an end his prospects for holding on to power were seriously in doubt. Subsequently, Somali politics seemed to have completely focused on internal conflict and repression. A body of disgruntled army officers, equally angry at Barre's poor leadership during the war and subsequent defeat attempted to stage a coup d'etat against the regime late in 1978. The coup, however, failed and together with their leader Colonel Mohamed sheikh Osman and 17 ringleaders were summarily executed. This finally led to the emergence of the armed oppositions. Somali Salvation Democratic Front (SSDF) was at first formed, followed by the Somali National movement (SNM). The nature of the leadership in Somalia was ruthless. In 1988, at the President's order, an aircraft from the Somali National Air Force bombed the city of Hargeisa in northwestern Somalia, killing nearly 10,000 civilians and insurgents. Economic crisis, brought on by the cost of anti-insurgency activities, caused further hardship as Siad Barre and his colleagues looted the national treasury. By the end of the 1980s, armed opposition to Barre's government, fully operational in the northern regions, had spread to the central and southern regions. Hundreds of thousands of Somalis fled their homes, claiming refugee status in neighbouring Ethiopia, Djibouti, and Kenya. ...read more.