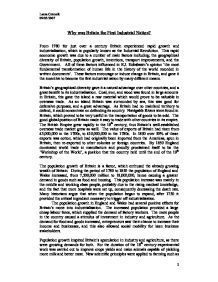 Why was Britain the First Industrial Nation?

Why was Britain the First Industrial Nation? From 1780 for just over a century Britain experienced rapid growth and industrialisation, which is popularly known as the Industrial Revolution. This rapid economic growth was due to a number of main factors including; the geographical diversity of Britain, population growth, inventions, transport improvements, and the Government. All of these factors influenced in E.J. Hobsbawn's opinion 'the most fundamental transformation of human life in the history of the world recorded in written documents'. These factors encourage or induce change in Britain, and gave it the incentive to become the first industrial nation by many different means. Britain's geographical diversity gave it a natural advantage over other countries, and a great benefit to its industrialisation. Coal, iron, and wood was found in large amounts in Britain, this gave the island a raw material which would prove to be valuable in overseas trade. As an island Britain was surrounded by sea, this was good for defensive purposes, and a great advantage. As Britain had no mainland territory to defend, it could concentrate on defending its country. Navigable Rivers were found in Britain, which proved to be very useful in the transportation of goods to be sold. The good global position of Britain made it easy to trade with other countries in its empire. ...read more.

In 1769 Richard Arkwright the so-called 'Father of the Factory System' realised the power potential of water and created the Water Frame. As the Water Frame could only be used on a large scale, near fast flowing water, and wasn't suited to domestic use, more factories were built, which provided employment for the ever-expanding population. Arkwright and his partner Jedidiah Strutt opened the first cotton-spinning factory at Cromford, Derbyshire. The Water Frame revolutionised the way cotton was spun, because previous to the invention of the Water Frame all the machines were hand powered on a small scale. But once the waterpower potential was realised the spinning production of cotton increased, from 4,000 pounds to 4,500 pounds. In 1782 James Watt invented the rotary steam engine, which used steam to produce a rotary motion, or power, factories no longer had to be built by fast flowing steams. Factories could now be built anywhere; therefore this encouraged the growth of industrial towns. During 1700 to 1760 many new inventions were created, and over 379 patents were awarded, which gave inventors exclusive rights, of their inventions. But this only gives a small suggestion of the total inventions of the 18th century, due to the fact that registering patents was very expensive. ...read more.

This period, he wrote, had been 'as disastrous and as terrible as any through which a nation passed'. The 1880s was a decade in which poverty was 'rediscovered', after half a century of economic growth which had brought the nation untold wealth, the lives of so many people were lived in poverty, squalor and ill health. For Toynbee as well as other historians such as Beatrice Webb and Barbara Hammond, the industrial revolution had had consequences, which were nasty, mean and brutish. Overall Britain was the first industrial nation and became the 'Workshop of the World' due to many crucial factors. It is very difficult to suggest a factor that was the foremost important, and influential of all. The three biggest factors, which were an affect to each other and resulted in the industrialisation of Britain, were overseas trade, the geographical diversity of Britain, and population growth. These factors were the basis of the economic growth in Britain, and they provoked other factors, which led to the industrialisation of Britain; Population growth stimulated demand that entrepreneurs were able to satisfy. Investment in industry often brought good returns. The state made little attempt to control growth. Foreign trade provided the raw materials and profits that could be invested in each enterprise. The industrialisation of Britain was a revolutionary process, which would prove to be easily gained by other countries and ultimately detrimental to Britain's supremacy prospects. Laura Curnock 09/05/2007 I ...read more.