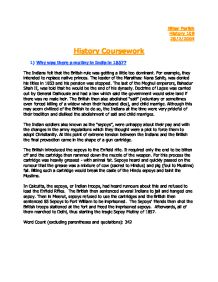 Nihar Parikh History 10B 28/2/2004 History Coursework 1) Why was there a mutiny in India in 1857? The Indians felt that the British rule was getting a little too dominant. For example, they intended to replace native princes. The leader of the Marathas: Nana Sahib, was denied his titles in 1853 and his pension was stopped. The last of the Moghul emperors, Bahadur Shah II, was told that he would be the end of his dynasty. Doctrine of Lapse was carried out by General Dalhousie and had a law which said the government would seize land if there was no male heir. The British then also abolished "sati" (voluntary or sometimes even forced killing of a widow when their husband dies), and child marrige. Although this may seem civilized of the British to do so, the Indians at the time were very prideful of their tradition and disliked the abolishment of sati and child marriges. ...read more.

The British then sentenced several Indians to jail and hanged one sepoy. Then in Meerut, sepoys refused to use the cartridges and the British then sentenced 85 Sepoys to Fort William to be imprisoned. The Sepoys' friends then shot the British troops stationed at the fort and freed the imprisoned sepoys. Afterwards, all of them marched to Delhi, thus starting the tragic Sepoy Mutiny of 1857. Word Count (excluding parentheses and quotations): 342 2) How far was trade the most important reason for the Scramble for Africa towards the end of the nineteenth century? During the end of the 19th century there was heavy colonisation, Africa saw the most dramatic colonisation. It was divided up as if it had been a cake split between greedy European powers. This was called the "Scramble for Africa". There were many motives for this scramble by the European powers. ...read more.

Britain took the Suez Canal so that it can reach India faster and covering less distance, instead of going around Africa this was a strategic motive. Belgium colonized Congo (which is around 80 times larger than Belgium) to feel prideful and to boast Belgian's reputation, this was a leadership motive. British were extremely confident and had expressed aggression when they fought the Zulus knowing that it would be an easy victory as Britain was technologically far superior (having machine guns) this was an aggressive motive. To say trade was the most important reason for the scramble of Africa would be an exaggeration. It is quite evident that there were many other important motives and although the economic motive might have been a key motive, trade was not. Word Count (excluding parentheses and quotations): 320 Sources of information Indian Mutiny: http://www.lexicorps.com/sepoy.htm - 29/2/2004 http://www.onwar.com/aced/nation/uni/uk/18/findia1857.htm - 29/2/2004 http://www.geocities.com/Broadway/Alley/5443/indmut.htm - 29/2/2004 http://en.wikipedia.org/wiki/Indian_Mutiny - 29/2/2004 Packet: Catchpole, Brian "Imperialism 1800-1914" International School Desktop Publishing, York, 1991 Scramble for Africa: http://en.wikipedia.org/wiki/Scramble_for_Africa - 29/2/2004 http://www.postcolonialweb.org/africa/scramble.html - 29/2/2004 http://www.saburchill.com/history/chapters/empires/0048.html - 29/2/2004 ...read more.