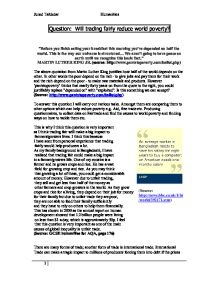 Question: Will trading fairly reduce world poverty? "Before you finish eating your breakfast this morning you've depended on half the world. This is the way our universe is structured... We aren't going to have peace on earth until we recognize this basic fact." MARTIN LUTHER KING JR. (source: http://www.pantstopoverty.com/ballot.php) The above quotation from Martin Luther King justifies how half of the world depends on the other. In other words the poor depend on the rich- to give jobs and pay them for their work and the rich depend on the poor - to make raw materials and products. However 'pantstopoverty' thinks that nearly forty years on from the quote to the right, you could justifiably replace "depended on" with "exploited". Is this something we can accept? (Source: http://www.pantstopoverty.com/ballot.php) To answer this question I will carry out various tasks. Amongst them are comparing them to other options which can help reduce poverty e.g. Aid, free trade etc. Producing questionnaires, to collect data on Fairtrade and find the causes to world poverty and finding ways on how to tackle them etc. This is why I think this question is very important as I think trading fair will make a big impact to farmers/growers lives. I think this because I have seen from personal experience that trading fairly would help producers a lot. As my family background is Bangladeshi, I have realised that trading fair could make a big impact in a farmer/growers life. One of my cousins is a farmer and he grows crops and rice. He has a vast field for growing crop and rice. As you may think that growing a lot of these, you could get a considerable amount of money. However due to unfair trading, they sell and get less than half of the money as other farmers and crop growers in the world. As they grow crops and rice for a living, they depend on their job for money for their family but due to unfair trade they are poor, they are not able to feed their family sufficiently and they have to rely on others to help them financially. ...read more.

Adding to this I think that the world trade organisation isn't going to reach and fulfil its goal- which is to help producers of goods and services, exporters, and importers conduct their business, because of its rules and not allowing countries to have their say on the rules. Having said this I believe that the WTO can be a major factor in solving unfair trade as there is an increase in members of the WTO. The above image shows the Current members of the WTO (in green) (Source: http://en.wikipedia.org/wiki/World_Trade_Organization#Criticism_3) So if Free Trade is a failure itself then maybe Fairtrade will help solve world poverty Fair Trade is defined by the International Federation for Alternative Trade (IFAT) as a trading partnership, based on dialogue, transparency and respect that seek greater equity in international trade. It contributes to sustainable development by offering better trading conditions to, and securing the rights of, marginalized producers and workers - especially in the South.(Source: IFAT) Fairtrade can have a big impact on the trading world and it has many goals to achieve. Some of these goals are: * To improve the livelihoods and well-being of producers by improving market access, strengthening producer organisations, paying a better price and providing continuity in the trading relationship. * To promote development opportunities for disadvantaged producers, especially women and indigenous peoples, and to protect children from exploitation in the production process. * To raise awareness among consumers of the negative effects on producers of international trade so that they can exercise their purchasing power positively. * To set an example of partnership in trade through dialogue, transparency and respect. * To campaign for changes in the rules and practice of conventional international trade. * To protect human rights by promoting social justice, sound environmental practices and economic security. (Source: BBC) Some commodities which are covered by the Fairtrade mark are: Food Products: * Bananas * Cocoa * Coffee * Cotton * Dried Fruit * Fresh Fruit & Fresh Vegetables * Honey * Juices * Nuts/Oil Seeds and Purees * Quinoa * Rice * Spices * Sugar * Tea * Wine (Source: Fairtrade.org) ...read more.

* Gave strengths and weaknesses of Free trade and WTO. * Explaining the meaning of Fairtrade and its goals. * Giving examples of Fairtrade products and who sell it. * Produced a questionnaire to help answer my question. * Gave pros and cons of Aid. * Explained different types of Aid. * Compared Aid to Fairtrade and came out with an outcome * Included pictures and graphics to my work. * If I gave my own views on the topic. * Developed my arguments so my work was more effective. * Use a range of information from different sources. * If I used reliable source as I relied heavily on a bias source. * I gave my own reflections on quotes to show my understanding. * Comment on graphs and graphics. * I gave my own thoughts on my arguments. * I didn't rely on one or two sources to give me information rather I should have varied my sources. * I had gone to different locations to retrieve data for my questionnaire. * Provided some case studies/evidence for some arguments surrounding Aid. I would like to conclude my essay by saying that I agree, that trading fairly will reduce World poverty. My reasons for my answer are that, Fairtrade can make a significant difference in a farmer's life as they are getting paid for their commodities at a fair price. Trading is also a big part of a farmer's life as they trade for a living. So trading fairly will prevent poverty. Fairtrade is also a long term help and support for farmers, and the word of Fairtrade is spreading as supermarkets are switching some of their products to Fairtrade. This can benefit a lot of people. If I had more time for this essay I would've done some things differently. For example I would've explained some issues into depth and illustrated them. I would've improved my questionnaire by asking more questions like, 'What kind of Fairtrade products do you purchase?' This might've helped me more in terms of my overall answer. ?? ?? ?? ?? Juned Talukdar Humanities 1 ...read more.