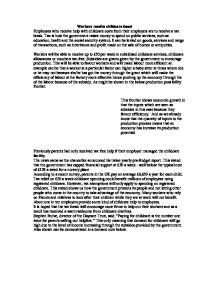 Workers receive childcare boost Employees who receive help with childcare costs from their employers are to receive a tax break. Tax is how the government raises money to spend on public services, such as education, health and the social security system. It can be levied on goods, services and range of transactions, such as inheritance and profit made on the sale of homes or antiquities. Workers will be able to receive up to �50 per week in subsidised childcare services, childcare allowances or vouchers tax-free. Subsidies are grants given by the government to encourage production. This will be able to favour workers and will make labour more efficient an example can be that a worker at a particular factor can higher a baby sitter at times where she or ...read more.

This stated that the government has capped financial support at �50 a week - well below the typical cost of �128 a week for a nursery place According to a recent survey, parents in the UK pay on average �6,650 a year for each child. Tax relief on �50 a week childcare spending could benefit millions of employees using registered childcare. However, tax exemptions will only apply to spending on registered childcare. This stated shows us how the government protects its people and not letting other people who come in the country to take advantage of the economy. Many workers who rely on friends and relatives to look after their children while they are at work will not benefit. ...read more.

"The measures announced today will help more working parents pay for childcare. The Chancellor is living up to his reputation as the childcare champion," Mr Burke added. However, other people are more sceptical about its merits. They believe it will add to the costs and complexities for employers, as well as raising national insurance costs for many employees who already benefit from NI free childcare and their employers. Work-based nurseries are expected to retain their current tax and NI free status. However, other forms of existing employer-provided childcare will be affected by the cap. All in all although this may bring good news to the employees with children registered it will also bring the employers a rip off from the workers because many workers can take advantage from both sides both from the government and from their employers. ...read more.