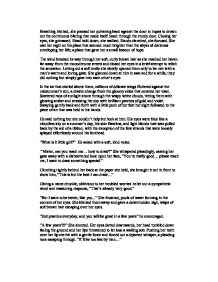 1000 words. What is it little girl? He asked with a soft, kind voice. Mister, can you teach me how to draw?

Breathing hitched, she pressed her quivering back against the door in hopes to drown out the continuous blaring that made itself heard through the sturdy door. Closing her eyes, she grimaced. Head held down, she walked. Hands clenched, she focused. She cast her sight on the place that seemed much brighter than the abyss of darkness enveloping her life; a place that gave her a small beacon of hope. The wind breezed its way through her soft, curly brown hair as she reached her haven far away from the monochrome streets and closed her eyes in a brief attempt to relish the sensation. Letting out a soft smile she slowly opened them only to be met with a man's warm and loving gaze. She glanced down at him in awe and for a while, they did nothing but simply gaze into each other's eyes In the air that circled above them, millions of delicate wings fluttered against the midsummer's sun, a drastic change from the gloomy skies that covered her town. ...read more.

"But I want to be better, like you..." She frowned, pools of water forming in the corners of her eyes. She blinked them away and gave a downtrodden sigh, wisps of soft brown hair escaping over her eyes. "Just practice everyday, and you will be great in a few years" he encouraged. "A few years?!!" She shouted. Her eyes darted downwards, her head tumbled down facing the ground and her lips threatened to let lose a wailing sob. Pushing her teeth over her lip she bit with a gentle force and forced out a dejected whisper, a pleading tone escaping through. "It'll be too late by then..." "What do you mean too late, what will happen?" He asked as he blinked in surprise and wonder at the girl who was now sobbing in front of him. A look of worry crossed his face as he continued to watch her. A desolate tear slid down her cheeks and her lips curved into a painful smile as she tore the picture she had drawn of her family, happily together. ...read more.

"I have an idea..." He said quietly. For a moment it was so quiet that she was almost sure her heart had stopped in anticipation. "Why don't we make a trade... your drawing for one thousand words?" "But...it's ripped, and what can I with one thousand words?" She blinked. Her voice quivered in a surprised manner and her eyes fixated on him, curiously wondering what he could possibly gain. He gave a warm serene smile and a gentle pat on the head in return. "Maybe, just maybe, one thousand words will be enough to convince your parents." She stared into his deep blue eyes that resembled puddles the deep blue sea of the ocean and as she gazed into them it felt as if he could see into her soul. A small smile grazed her face and innocently she nodded at his words, feeling like her hopes had been answered. She put on an earnest face and allowed herself to trust him. Small specs of light streamed through the spaces in between the trees and shone beautifully, innocently between them. The little girl sat awaiting in hope... ?? ?? ?? ?? ...read more.