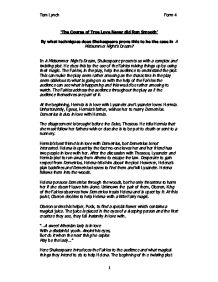 &amp;#145;The Course of True Love Never did Run Smooth&amp;#146; - By what techniques does Shakespeare prove this to be the case in A Midsummer Night&amp;#146;s Dream?

'The Course of True Love Never did Run Smooth' By what techniques does Shakespeare prove this to be the case in A Midsummer Night's Dream? In A Midsummer Night's Dream, Shakespeare presents us with a complex and twisting plot. He does this by the use of the Fairies mixing things up by using their magic. The Fairies, in the play, help the audience to understand the plot. This can make the play seem rather amusing as the characters in the play seem oblivious to what is going on so with the help of the Fairies the audience can see what is happening and this would be rather amusing to watch. The Fairies address the audience throughout the play as if the audience themselves are part of it. At the beginning, Hermia is in love with Lysander and Lysander loves Hermia. Unfortunately, Egeus, Hermia's father, wishes her to marry Demetrius. Demetrius is also in love with Hermia. The disagreement is brought before the Duke, Theseus. He tells Hermia that she must follow her fathers wish or else she is to be put to death or sent to a nunnery. Hermia's best friend is in love with Demetrius, but Demetrius is not interested. ...read more.

As they argue, Oberon and Puck watch and realise the mistake Puck has made. "This is the woman, but not the man." Here, Shakespeare is allowing the audience to realise Puck's mistake and the potential consequences. Demetrius soon gets bored with arguing and settles down to go to sleep, leaving Hermia to wonder in the woods looking for Lysander. To try and undo what the Fairies have done, Puck applies the love juice into Demetrius' eyes. By doing this Shakespeare's audience begin to understand how confusing things can get, but find it amusing as the lovers are completely unaware of what is happening to them. Whilst this is all going on, Lysander is trying to proclaim his love for her is true. As he chases her through the woods, they come across Demetrius who is sleeping. As he wakes, he sees Helena and he too falls in love with her. This makes the plot of A Midsummer Night's Dream very confusing indeed. Helena starts to get confused as to why the two men have suddenly fallen in love with her and begins to feel it is some cruel trick led by Hermia. She confronts Hermia who defends her self and it all becomes one very big heated argument. ...read more.

Hermia.", and Hermia represents Youth, "So will I grow, so live, so die, my lord, ere I will yield my virgin patent up." Just as almost any love story, it all turns out all right, with Hermia having her wish to marry Lysander granted to her by Theseus. This happens mainly due to the help of the Fairies who, in the end, get Demetrius to fall in love with Helena. I feel that Theseus decided to overrule Egeus because he felt that I wasn't right to force to people to marry each other who didn't love each other and also it was his wedding day and he probably would have felt it right to let the lover's make their own decisions. I believe that I modern audience would feel this to be the right thing do and therefore be all right with it. However, an audience in Shakespeare times would have probably been very shocked to see a young girl go against the wishes of her father as it was not allowed in Elizabethan times. When we first meet Hermia in the play, she is wildly in love with Lysander and therefore is very passionate but distraught about the fact that her father wants her to marry Demetrius. ?? ?? ?? ?? Tom Lynch Form 4 1 ...read more.