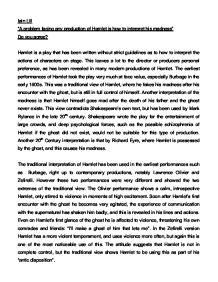 &amp;#147;A problem facing any production of Hamlet is how to interpret his madness&amp;#148;. Do you agree?

Iain Lill "A problem facing any production of Hamlet is how to interpret his madness" Do you agree? Hamlet is a play that has been written without strict guidelines as to how to interpret the actions of characters on stage. This leaves a lot to the director or producers personal preference, as has been revealed in many modern productions of Hamlet. The earliest performances of Hamlet took the play very much at face value, especially Burbage in the early 1600s. This was a traditional view of Hamlet, where he fakes his madness after his encounter with the ghost, but is still in full control of himself. Another interpretation of the madness is that Hamlet himself goes mad after the death of his father and the ghost never exists. This view contradicts Shakespeare's own text, but has been used by Mark Rylance in the late 20th century. Shakespeare wrote the play for the entertainment of large crowds, and deep psychological forces, such as the possible schizophrenia of Hamlet if the ghost did not exist, would not be suitable for this type of production. Another 20th Century interpretation is that by Richard Eyre, where Hamlet is possessed by the ghost, and this causes his madness. The traditional interpretation of Hamlet has been used in the earliest performances such as Burbage, right up to contemporary productions, notably Lawrence Olivier and Zefirelli. ...read more.

This shows a reasoning not usually associated with the mad and this point is brought out in the traditional productions. A.C. Bradley considered that madness was not too far from Hamlet; "'Melancholy,' I said, not dejection, nor insanity. That Hamlet was not far from insanity is very probable." A more radical and modern production by Richard Eyre shows a very unusual view of Hamlet. There is no actor playing the Ghost, rather Hamlet is shown as possessed, or believing he is possessed. The audience is left to decide whether a supernatural spirit has really possessed Hamlet, or whether he is schizophrenic and this could pose one problem for the production; the audience may perceive Hamlet as genuinely mad. This interpretation is very much moving away from the traditional Hamlet, and is not how the play was envisioned by Shakespeare, which makes for problems in the production. The play would have to be edited to remove the parts where other people see the ghost such as Act 1 Scene1, or if not cut, these scenes would have to be changed, perhaps using some the psychology behind "Psycho", with Hamlet dressing as his father and saying the ghost's lines. Act 1 Scene 4 could have Horatio and Hamlet's sighting of the ghost cut, with Hamlet alone on the stage speaking the ghost's lines, revealing the old Hamlet's murder. ...read more.

This internal strife shows a deeper more psychological madness that can alter his perceptions of himself and those around. Another interpretation may be that Hamlet puts on the antic disposition at first, but then this develops into a real madness, although the text seem to suggest the opposite happens. When he returns from his trip it seems that acting mad has made his real madness die down. When Hamlet is talking with Polonius in Act 2 Scene 2 deliberately finds the excuse to insult him, covering it with his antic disposition. However when Hamlet appears to Ophelia in a state of undress the is ambiguity whether it is part of his faked madness or a genuine affliction. After he returns from his trip there seems to be less made of the antic disposition, and Hamlet seems more focussed on what he must do, and more angry, perhaps leaning more towards the traditional revenge hero, seeking to right a wrong without prevarication. This manipulation of the text through new editions, and productions such as Pryce and Rylance mean the text of Hamlet is open for debate, and these questions about the productions make it harder to chose a method of interpretation of his madness, if indeed that is what it is. The madness is a problem for anyone staging a production of Hamlet as it would involve a personal handling of not only the visual acting but in some cases the text itself. ...read more.