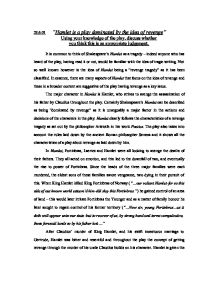 &amp;#147;Hamlet is a play dominated by the idea of revenge&amp;#148;. Using your knowledge of the play, discuss whether you think this is an appropriate judgement.

23.6.01 "Hamlet is a play dominated by the idea of revenge" Using your knowledge of the play, discuss whether you think this is an appropriate judgement. It is common to think of Shakespeare's Hamlet as a tragedy - indeed anyone who has heard of the play, having read it or not, would be familiar with the idea of tragic writing. Not so well known however is the idea of Hamlet being a "revenge tragedy" as it has been classified. In essence, there are many aspects of Hamlet that focus on the idea of revenge and these in a broader context are suggestive of the play having revenge as a key issue. The major character in Hamlet is Hamlet, who strives to avenge the assassination of his father by Claudius throughout the play. Certainly Shakespeare's Hamlet can be described as being "dominated by revenge" as it is unarguably a major factor in the actions and decisions of the characters in the play. ...read more.

he gained control of an area of land - this would later irritate Fortinbras the Younger and as a matter of family honour he later sought to regain control of his former territory ("...Now sir, young Fortinbras...as it doth well appear unto our state-but to recover of us, by strong hand and terms compulsative, those foresaid lands so by his father lost...." After Claudius' murder of King Hamlet, and his swift incestuous marriage to Gertrude, Hamlet was bitter and resentful and throughout the play the concept of getting revenge through the murder of his uncle Claudius builds on his character. Hamlet is given the opportunity of killing Claudius when he is at prayer but decides against his actions, as this would, according to religious beliefs at the time, cause him to ascend directly to heaven whereas Hamlet wanted Claudius to go to h**l where he felt he deserved to be ("Now might I do it ...read more.

As a back-up plan, Claudius had prepared a poisoned drink that he intended Hamlet to drink in case something went wrong with the sword fight; however Hamlet refused to drink it and instead Gertrude drank it. After Hamlet realised that both the sword and the drink were poisoned, he forced Claudius to drink it with his last breaths ("The point envenomed too! Then venom to thy work...Here, thou incestuous, murderous, damned Dane, drink of this potion,-is thy union here? Follow my mother."). Clearly Hamlet is dominated by the idea of revenge. The whole movement of the play and the characters actions are based around the influences of their desire for revenge. Hamlet is a very powerful play and it continues to be popular today because of the tragic events it contains. In each case where revenge is sought out, a death ultimately results. Hamlet is certainly highly involved with the idea of revenge and it plays a major role throughout the play. ...read more.