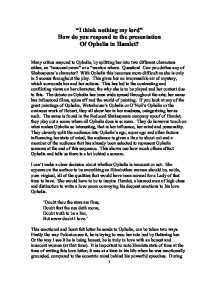 "I think nothing my lord" How do you respond to the presentation Of Ophelia in Hamlet? Many critics respond to Ophelia, by splitting her into two different characters either, an "innocent pawn" or a "wanton whore. Question! Can you define any of Shakespeare's character? With Ophelia this becomes more difficult as she is only in 5 scenes throughout the play. This gives her an irrepressible air of mystery, which surrounds her and her actions. This has led to the contrasting and conflicting views on her character, the why she is to be played and her context due to this. The debate on Ophelia has been wide spread throughout the arts; her name has influenced films, spins off and the world of painting. If you look at any of the great paintings of Ophelia, Waterhouse's Ophelia or O'Neil's Ophelia or the ominous work of Hebert, they all show her in her madness, categorizing her as such. The same is found in the Reduced Shakespeare company spoof of Hamlet, they play out a scene where all Ophelia does is scream. They do however touch on what makes Ophelia so interesting, that is her influence, her mind and personality. They cleverly split the audience into Ophelia's ego, super ego and other factors influencing her state of mind, the audience is given a line to shout out and a member of the audience that has already been selected to represent Ophelia screams at the end of this sequence. ...read more.

As she knows no better, could we blame her for sleeping with Hamlet before marriage? The answer for both may be found in the text, the signals for both are clear in Act4 Scene5. She sings 'Quoth she, 'before u tumbled me, You promised me to wed.' He answers- 'So I would I ha' done, by yonder sun, ` And thou hadst not come to my bed.' The words 'tumbled me' means basically 'had sex with me', so we can clearly see that there relationship was sexual, if she is referring to their relationship. If she is speaking the truth but did she make love to him with no feeling just because she could, or, because she was in love with a chance to wed the man she wanted? I strongly believe the later to be true, I don't believe she would commit to having sex with Hamlet without love. Therefore I believe she asked for, or, was offered marriage. This is similar to what happens to Romeo and Juliet, but, unlike Juliet, Ophelia has sex on the belief she is to be married, whereas Juliet waits till she is married. Her innocence is shown in agreeing to this with out realizing first that Hamlet might just be after sex. Did they have sex before old Hamlets death or after? The answer to this question will greatly affect the above point. I think Hamlet told Ophelia he would wed her honestly but this was before his own father died changing him. (How much did the death of Old Hamlet affect Hamlets love for Ophelia?) ...read more.

It comes across as being extremely claustrophobic; everyone knows each other private lives it appears. The only person that seems to get any space for himself is Hamlet. He has long soliloquies; these become more numerous as he fakes his madness. The point I am coming to is that Ophelia is set free when she dies, she escapes the repression and claustrophobia of Elsinore. Is Shakespeare making a comment about society? This is echoed in the history of Britain, at the end of Queen Elizabeth's reign, she was set free and a new King came from the north to take the throne and set England on a whole new course. In conclusion Ophelia is a very simple character made complicated by others. She was an innocent young woman, to be eventually dragged up into women hood, to be used and eventually to death. This is a result of her environment-no mother's influence throughout, except for Gertrude's poor attempt, a father who is indifferent about his children's welfare and a brother away. She falls in love with the crown prince of Denmark; he to loves her "More than a hundred brothers". The madness within the castle reduces her to the same state and like Denmark itself dies. A case of innocence robbed? No a case of innocence mislead, but with out this innocence does she become a "wanton whore"? I'm not sure what to think I'm left wondering what Shakespeare intended. This Shakespeare play presents more questions than it answers and with out the answer I am still unsure on Ophelia's intended character. ?? ?? ?? ?? 1 ...read more.