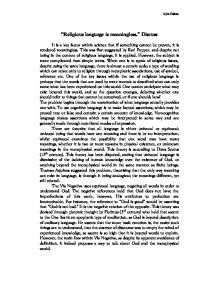 "Religious language is meaningless." Discuss It is a key factor within science that if something cannot be proven, it is rendered meaningless. This was first suggested by Karl Popper, and despite not being in the context of religious language, it is applied. However, the subject is more complicated than simple terms. When one is to speak of religious issues, despite using the same language, there is almost a certain code; a type of wording which can relate only to religion through metaphoric associations, use of symbol, reference etc. One of the key issues within the use of religious language is perhaps that the words that are used by mere mortals to described what can only name what has been experienced on this world. One cannot anticipate what may exist beyond this world, and so the question emerges, debating whether one should refer to things that cannot be conceived, or if one should; how? The problem begins through the examination of what language actually provides one with. ...read more.

The negative references hold that God does not have the imperfections of this earth, however, His attributes to perfection are inconceivable. For instance, the reference to "God is good" would be asserting that "God is not bad." It is the negative relation of the opposite. This theory was devised through platonic thought by Plotinus (3rd century) who held that ascent to the One lies in an apophatic type of meditation, as God is beyond description of ordinary language. He asserts that the more basic emotion is, the easier such things are to understand, that the absence of discourse was to empty the mind of experienced knowledge, as ascent is so high that it is beyond words to explain. However, the main flaw within Via Negativa, as despite its apparent avoidance of definition, it indeed proposes a way to talk about God and the metaphysical world. Logical positivists examine how to use language as a way of conveying knowledge, and for any statement to have meaning it must be verifiable. ...read more.

The basis of the falsification principle is that the assertion of any given fact also asserts the negation of the opposing factors. Anthony Flew held this theory, taking an anti-realist point of view, suggesting that if one does not provide such conditions, it is blind faith. It is a non-cognitive use of language, and this interpretation can often be flawed by the believer through the "death by a thousand qualifications" which means the blind qualification of religion to be something it is not. A response to this argument is that falsification is a meaningful principle, but religious language cannot be falsified. This was supported by R.M. Hare, who suggested that religious language is a "blik"; a personal interpretation of the language which is right or wrong. However, this has been criticised through the lacking explanation of why bliks are right or wrong. Bliks are also similar to Collingwood's "ultimate presuppotion" which is the basis for interpreting one's experiences. C.S. Evans supports these criticisms, noting the implication that they are cognitive, and these facts assert that everything cannot be verified or falsified. ...read more.