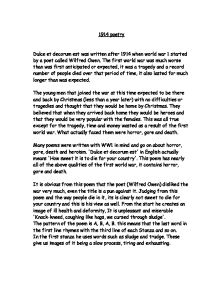 1914 poetry Dulce et decorum est was written after 1914 when world war 1 started by a poet called Wilfred Owen. The first world war was much worse than was first anticipated or expected, it was a tragedy and a record number of people died over that period of time, it also lasted for much longer than was expected. The young men that joined the war at this time expected to be there and back by Christmas (less than a year later) with no difficulties or tragedies and thought that they would be home by Christmas. ...read more.

This poem has nearly all of the above qualities of the first world war, it contains horror, gore and death. It is obvious from this poem that the poet (Wilfred Owen) disliked the war very much, even the title is a pun against it. Judging from this poem and the way people die in it, its is clearly not sweet to die for your country and this is his view as well. From the start he creates an image of ill health and deformity, It is unpleasant and miserable 'Knock-kneed, coughing like hags, we cursed through sludge'. ...read more.

'Gas! GAS! Quick boys!' This shows us of great panic, emphasised by gas being repeated in exclamation marks (It being shouted). It is direct speech. 'Dim, through the misty panes and thick green light,' again this is a referral to the blindness in the trenches from the green chlorine gas being imitated from the shells, which had just been dropped. 'He plunges at me, guttering, choking, drowning.' Strong verbs are used here to describe this and repetition is used to emphasise this. Owens overall message is that war is bad and this particular war had many devastating affects on people. For instance they lose all their morale and they lost friends and colleagues and family. The climate at that current time was lethal. ...read more.