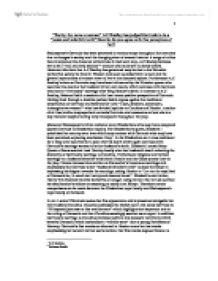 Frailty, thy name is woman(TM)(TM) A.C Bradley has judged Gertrude to be a weak and unfaithful wife(TM)(TM) How far do you agree with this perception of her?

''Frailty, thy name is woman'' A.C Bradley has judged Gertrude to be a ''weak and unfaithful wife'' How far do you agree with this perception of her? Shakespeare's Gertrude has been perceived in various ways throughout the centuries due to changes in society and the changing view of women's status. A range of critics have interpreted the character of Gertrude in their own way, A.C Bradley believes her to be a ''dull and very shallow''1 woman who is content to please others. However this view that A.C Bradley has generated may be due to the Victorian patriarchal society he lived in. Women were seen as subservient to men and the general expectations of women were to live in the domestic sphere. Furthermore A.C Bradley's view on Gertrude may have been influenced by the Victorian queen who mourned the death of her husband till her own death, which contrasts with Gertrude who has an ''o'er-hasty'' marriage after King Hamlet's death. In contrast to A.C Bradley, Rebecca Smith a modern critic has a more positive perspective of Gertrude. Having lived through a feminist period, Smith argues against the traditional presentation of Gertrude and believes her to be ''a soft, obedient, dependent, unimaginative woman''2 who has divided loyalties to Claudius and Hamlet. Another critic Lisa Jardine is sympathetic towards Gertrude and comments on how she is a key character despite having very little speech throughout the play. ...read more.

Hamlet also conveys the traditional view of women as he states how Gertrude did not mourn long enough for his father by comparing her to a beast who ''Would have mourn'd longer'', highlighting the Elizabethan expectation of women. It is clear that Gertrude sees the situation differently to Hamlet and is more pragmatic in her thinking. A.C Bradley's view of Gertrude in this context mirrors Hamlets as he believes her to be ''untroubled by any shame''4 of her hasty marriage and Hamlet's feelings towards the matter. Both Hamlet's and A.C Bradley's views reflect the traditional Elizabethan and Victorian perception of women. In Act 2 Scene 2 Gertrude agrees for Rosencrantz and Guildenstern to spy on Hamlet. This agreement from Gertrude may be interpreted as a betrayal of Hamlet, allowing them to spy on him. However it may also be interpreted that Gertrude, truly as a doting mother, wants the best for him and so by spying on Hamlet the true cause for his so called madness can be discovered. Yet Gertrude reveals her lack of knowledge for Hamlet and believes that Rosencrantz and Guildenstern are the two men ''to whom he most adheres.'' In reality Hamlet's true companion is Horatio. She however demonstrates her intuitive understanding by analysing Hamlet's grief and understanding the cause for it to be ''no other but the main, /His father's death'' and her ''o'er hasty marriage''. ...read more.

showing her concern for him. Through her speech and actions Gertrude suggests that she isn't a guileful or carnal woman. However Gertrude is seen as a sexualised object by the three men in her life as Claudius states that she has been ''Taken to wife'' by him highlighting his perception of Gertrude as an object. This view leads these three men to think that Gertrude should behave in a way they consider appropriate for a woman. A.C Bradley also has a stereotypical view of Gertrude and overall believes that she should have been more loyal to old Hamlet. In Act 3 Scene 4 in the Closet scene, Gertrude is complicit in Claudius' plan to spy on Hamlet knowing that Polonius is listening behind the arras. Some believe that Gertrude's actions of deliberately deceiving Hamlet show her intentions not to be honourable. However Gertrude's actions can also be seen as those which should benefit Hamlet and help find the cause of his change. However Hamlet takes control and verbally attacks Gertrude about her bad deed as to ''kill a king and marry with his brother.'' This accusation causes Gertrude to innocently question his words; ''As kill a King?'' this rhetorical question confirms her innocence which A.C Bradley agrees is an ''evidently genuine''8 response implying that Gertrude had no involvement in the murder of old Hamlet. 1 A.C Bradley 2 Rebecca Smith 3 Rebecca Smith 4 A.C Bradley 5 Rebecca Smith 6 Rebecca Smith 7 Rebecca Smith 8 A.C Bradley ?? ?? ?? ?? 1 ...read more.