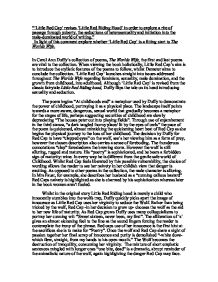 Little Red Cap revises Little Red Riding Hood in order to explore a rite of passage through puberty, the seductions of heterosexuality and initiation into the male-dominated world of writing. In light of this

"'Little Red Cap' revises 'Little Red Riding Hood' in order to explore a rite of passage through puberty, the seductions of heterosexuality and initiation into the male-dominated world of writing." In light of this comment explore whether 'Little Red Cap' is a fitting start to The Worlds Wife. In Carol Ann Duffy's collection of poems, The Worlds Wife, the first and last poems are vital to the collection. When viewing the book holistically, Little Red Cap's aim is to introduce the stylistic features of the poems to follow, whilst Demeter aims to conclude the collection. 'Little Red Cap' launches straight into issues addressed throughout The Worlds Wife regarding feminism, sexuality, male domination, and the growth from childhood, into adulthood. Although 'Little Red Cap' is revised from the classic fairytale Little Red Riding hood, Duffy flips the tale on its head introducing sexuality and seduction. The poem begins "At childhoods end" a metaphor used by Duffy to demonstrate the power of childhood, portraying it as a physical place. The landscape itself points towards a more aware, dangerous, sexual world that gradually becomes a metaphor for the stages of life, perhaps suggesting securities of childhood are slowly depreciating "The houses peter out into playing fields". ...read more.

Red caps use of her innocence is the first hint at the sacrifices she is to make for "Poetry". Once the wolf and Red Cap share a night of passion together her final scrap of innocence and purity is demolished "-white dove- which flew, straight, from my hands to his open mouth." The Wolf becomes the destruction of tranquility, consuming her virginity. The mixture of short emphatic sentences mingled with longer ones "one bite, dead" is a dramatic, abrupt reminder of the animalistic nature of the wolf, again highlighting the danger Red Cap may face. Her ironic tone throughout the poem "for/ what little girl doesn't dearly love a wolf?" is employed by Duffy in order to give Red Cap a witty smart and scheming personality. As Irony is often a trait associated with the dry humor of maturity, the fact that the wit seems to come from Red Cap rather than the wolf demonstrates her superiority. Red Cap re-instates her childishness in using "Little girl" making the reader feel uneasy, which is the opposite reaction to a rhetorical question. Red Cap begins playing on literary techniques implying the benefits of her sacrifices are already present. ...read more.

Other poems that encapsulate the death of a male character -such as Queen Kong- the reaction to the death is remorseful, clearly portraying a relationship filled with love "There were things he could do for me with the sweet finesse of those hands". Wheras Red cap is empowered by the death of the Wolf implying males, in fact, merely suppress the success of females. Red Caps empowerment, however is debatable. Although it is true that she manipulated the wolf, her manipulation was through playing on the knowledge of male vanity. Her continuous perception is that she is far smarter than the Wolf and that she is aware of what she is doing, however ultimately her methods of receiving what she wants are self exploitation. 'Little Red Cap' explores sexuality and seduction whilst also raising issues of feminism which are recurrent throughout the collection. Red Cap successfully highlights the themes to follow in The worlds wife whilst also introducing the idea of growth through poetry, giving it an autobiographical feel. Duffy's decision to revert such a well known fairytale hooks the reader instantly to the collection. The issues of society and sexuality sets up the reader for the subsequent poems and introduces them perfectly to the writing of Carol Ann Duffy. ...read more.