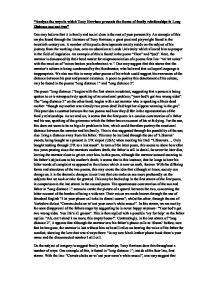 "Analyse the ways in which Tony Harrison presents the theme of family relationships in Long Distance one and two" One may believe that it is family and social class is the root of your personality. An example of this maybe found through the literature of Tony Harrison, a great poet and playwright found in the twentieth century era. A number of his poetic developments mainly reside on the subject of his journey from the working class, onto an education at Leeds University which allowed him to prosper in the field of linguistics. An example of this is found in the poem "Then" and "[uz]". Here, the narrator is denounced by their head master for mispronunciation of a poems first line: "mi'art aches" with the reaction of "mines broken you barbarian t.w.". One may suggest that this shows that the narrator's culture is being condemned by the Headmaster, who believed that colloquial language is inappropriate. We also see this in many other poems of his which could suggest his awareness of the distance between his past and present existence. A poem to portray this detachment of his culture; may be found in the poems "long distance 1" and "long distance 2". The poem "long distance 1"begins with the first stanza as subtext; suggesting that a person is being spoken to or is retrospectively speaking of an emotional problem; "your bed's got two wrong sides". The "long distance 2" on the other hand, begins with a set narrator who is speaking of their dead mother: "though my mother was already two years dead Dad kept her slippers warming in the gas". ...read more.

possibly have a higher intellect in comparison with his father, or may even show that his culture has partially been removed from what he has learnt through his studies; acting as a detachment of their relationship through the use of auditory imagery. In "long distance 2" however, auditory imagery may be used to convey a sense of hope, or in a sense, denial of the actions of fate in reality. We see this in the third stanza, line three, as we are told that although the narrator's mother has passed on, the narrators father still anticipates his wife's return home: "though sure that very soon he'd hear the key scrape in the rusted lock and end his grief". On this quotation, one may feel that this composes the impression that although the father is waiting to hear the sound of the rugged key hole being turned, it also suggest the timeframe since his wife's death as the 'rusted' lock may imply that the father has either neglected his duty to keep the house maintained, or also that the wife has been absent for so long, that domestic 'housewife' jobs have not being completed; such as cleaning etc. Another imagery device which is also clearly portrayed is the use of visual imagery. One is able to see this through the use of the first long distance poem. In this poem, the imagery used seems to indicate the emotional distance between the two family members. ...read more.

By using "New World treats", this may suggest the aging time in his Dad life, as we are provided with the idea that his father has Diabetes "Ah'm diabetic now. Got all the facts". Although this could be suggested, at the end of this stanza we are told by the narrator that these were bought as a 'last thought': "only bought rushing through JFK as a last thought" which could highlight the disconnection of the two male personas. In the latter poem, when being told of the fathers denial of the mothers death, stanza two represents how the father restricts the son from seeing his true personality as he clears up all memorabilia of the mother as if clearing up for a long distance relative: "He'd put you off an hour to give him time to clear away her things and look along as though his still raw love were such a crime". In conclusion, Tony Harrison is able to successfully create a balance of family relationships throughout a number of ways. He does this though a number of varying poetic techniques which in some cases is used to convey the contrast between his upbringing and his education. Be that as it may, from one's personal opinion being based on the inspection of this poem, it seems that a valid argument to this is that although it seemed that the narrators (Harrison) relationship to his father was long distance, after his death, he appreciated who his father was and even though he was at times 'dismal'; he still is attached to his father through the "disconnected number I still call". ...read more.