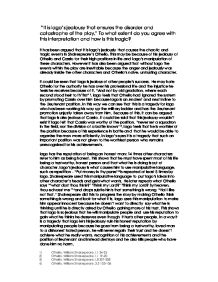 It is Iagos jealousy that ensures the disorder and catastrophe of the play. To what extent do you agree with this interpretation and how is this tragic?

"It is Iago's jealousy that ensures the disorder and catastrophe of the play." To what extent do you agree with this interpretation and how is this tragic? It has been argued that it is Iago's jealously that causes the chaotic and tragic events in Shakespeare's Othello, This may be because of his jealousy of Othello and Cassio for their high positions in life and Iago's manipulation of these characters. However it has also been argued that without Iago the events within the play are inevitable because the anger and jealously was already inside the other characters and Othello's naive, untrusting character. It could be seen that Iago is jealous of other people's success. He may hate Othello for the authority he has over his professional life and the injustice he feels he receives because of it, "And not by old gradation, where each second stood heir to th'first"1, Iago feels that Othello had ignored the system by promoting Cassio over him because Iago is an Ancient and next in line to the Lieutenant position. ...read more.

Iago uses this manipulation to make him appear innocent because he doesn't want to directly say what he is thinking until he is directly asked by Othello gaining more of his trust. This shows that Iago is so jealous that he will manipulate people and use his reputation to gain what he thinks he deserves even though it hurts other people. In a way it is a tragedy that Iago lets his jealousy ruin his honest reputation by manipulating people because he goes from being a trustworthy, loved man to a dishonest hated person, he will never regain their trust and he doesn't achieve what he really wants, recognition of his achievements and the position of lieutenant and instead destroys and he also kills people who have done him no harm. On the other hand, it could be argued that it is not Iago's jealousy that causes the chaos within the play, the faults of others could be to blame. The other characters already had the potential to cause this chaos themselves, Iago doesn't actually hurt anyone until the end, he merely suggests things and the characters follow what he says although simple reasoning would prove him wrong. ...read more.

However, it could then be argued that Iago is to blame for telling Othello these lies, telling Emelia to take the handkerchief and taking advantage of Othello's naive nature. Although it could be argued that it was not Iago, who caused the disorder and catastrophe of the play because of the potential for chaos in the other characters and the character of Othello, Iago puts the negative ideas into each character's heads which made them paranoid or want to commit murder. Without Iago the characters wouldn't have considered treating each other badly and if Iago wasn't jealous then he would have no reason to try to destroy Othello. Although there is evidence to suggest otherwise, the interpretation that it is Iago's Jealousy that causes the chaos within the play is correct and this is tragic because Iago needlessly ruins his reputation, Othello falls from being a calm respectable man to a na�ve murderer and many people are killed in the process. ?? ?? ?? ?? ...read more.