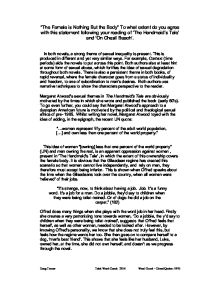 The Female is Nothing But the Body To what extent do you agree with this statement following your reading of The Handmaids Tale and On Chesil Beach.

"The Female is Nothing But the Body" To what extent do you agree with this statement following your reading of 'The Handmaid's Tale' and 'On Chesil Beach'. In both novels, a strong theme of s****l inequality is present. This is produced in different and yet very similar ways. For example, Context (time periods) aids the novels to put across this point. Both authors also at least hint at some form of s****l abuse, which fortifies the idea of s****l degradation throughout both novels. There is also a persistent theme in both books, of rapid reversal, where the female character goes from a status of individuality and freedom, to one of subordination to men's desires. Both authors use narrative techniques to show the characters perspective to the reader. Margaret Atwood's s****l themes in The Handmaid's Tale are obviously motivated by the times in which she wrote and published the book (early 80's). To go even further, you could say that Margaret Atwood's approach to a dystopian American future is motivated by the political and theological s****l ethics of pre- 1985. Whilst writing her novel, Margaret Atwood toyed with the idea of adding, in the epigraph, the recent UN quote: "...women represent fifty percent of the adult world population, [...] and own less than one percent of the world property." ...read more.

"...She was twelve years old, lying still like this, waiting, shivering in the narrow bunk with polished mahogany sides...". Florence compares the way she lay on a bunk in a bed on her fathers boat, to how she is lying, feeling vulnerably naked while Edward undresses in preparation for their love making, this suggests that a traumatic s****l experience occurred at this point in her life. Such trauma is shown by the emphasized detail of the wooden interior, it appears that she was trying to concentrate on anything but the present situation, much like she is doing in the hotel room. "...It was late in the evening, and her father was moving around the cabin, undressing, like Edward now." We are told that her father is taking off his clothes the same way the Edward is. McEwan explains subtly that there are different methods of de-robing, and having explained earlier that Edward "undressed hurriedly", we are giving insight into an implied paternal r**e of Florence at a young age. A shocking discovery, that McEwan only hints at, further emphasising the fact that it is an instance too terrible to discuss. The fact that Florence is one a boat, crossing the channel means that she cannot escape from her father, she is trapped, physically, where as now she is trapped mentally; she wants to please Edward, but she doesn't want to have to be put in a s****l situation again. ...read more.

We are left with a central scene from a life, but not a still life, for the motion of the characters' minds and the aftermath of their encounter reverberates through time." He suggests that McEwan's 'hopping' between person, time and place bring the characters of Edward and Florence alive from the numb state which they are in on Chesil Beach. This technique is similar to that of modernist writers of the early twentieth century such as Woolf, and Joyce who 'tunneled' massive caverns of history behind their characters which built up their personalities'. In this case it causes a clash between Edward and Florence as Edward feels he should be in control, but is not in control of himself, a feeling that is shown through instances in his life such as his mother becoming brain damaged by a freak accident. Florence contrasts this by feeling out of control, and feels like that is her rightful place, this has been induced by her aforementioned experiences of s****l abuse. Both novels have strong links, and equally strong differences. However, both writers have expressed these similarities or differences using the same techniques. Resulting in a clear theme of unequal s****l ethics towards women. They have used role reversal, language, disturbing experiences of abuse, contextual knowledge and narrative technique to conclude with the ideology of 'The Female [being] Nothing But the body'. ?? ?? ?? ?? [Type text] [Type text] [Type text] Doug Turner Total Word Count: 2354 Word Count - Direct Quotes: 1995 ...read more.