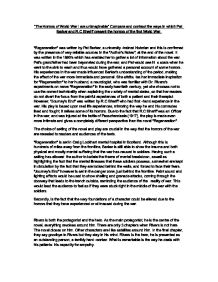 The Horrors of World War I are unimaginable Compare and contrast the ways in which Pat Barker and R.C Sheriff present the horrors of the first World War

"The Horrors of World War I are unimaginable" Compare and contrast the ways in which Pat Barker and R.C Sheriff present the horrors of the first World War "Regeneration" was written by Pat Barker, a university-trained historian and this is confirmed by the presence of very reliable sources in the "Author's Notes", at the end of the novel. It was written in the 1990's which has enabled her to gather a lot of information about the war. Pat's grandfather had been bayoneted during the war, and Pat would see his scars when he went to the sink to wash and thus would have gathered a personal account of some horrors. His experiences in the war made influenced Barker's understanding of the period, making the effect of the war more immediate and personal. She attributes her immediate inspiration for "Regeneration" to her husband, a neurologist, who was familiar with Dr. Rivers's experiments on nerve "Regeneration" in the early twentieth century, yet she chooses not to use the correct technicality when explaining the variety of mental states, so that her readers do not divert the focus from the painful experiences of both a patient and their therapist. However, "Journey's End" was written by R.C Sheriff who had first-hand experience in the war. His play is based upon real life experiences, mirroring the way he and his comrades lived and fought; it relives some of its horrors. ...read more.

The dialogue between Sassoon and Owen, in page 83 chapter 8, deals with war but the way they talk is extremely subjective. "At night you could get the sense of something ancient. As if the trenches had always been there." Realistic writing likes to insist on things that are disagreeable and wants to show reality as it is. Pat Barker gives the reader lots of details about life in the trenches: "It was flooded. You stand the whole time. Most of the time in pitch darkness because the blast kept blowing the candles out. We were packed in so tight we couldn't move. And they just went all out to get us. One shell after the other. I lost two sentries. Direct hit on the steps. Couldn't find a thing." "And you had forty-eight hours of that ?" "Fifty. The relieving officer wasn't in a hurry." (p52) "Your watch is brought back by a runner, having been synchronized at headquarters." A long pause. "You wait, you try to calm down anybody who's obviously s******g himself or on the verge of throwing up. You hope you won't do either of those things yourself. Then you start the countdown: ten, nine, eight... so on. You blow the whistle. You climb the ladder. Then you double through a gap in the wire, lie flat, wait for somebody else to get out - and then you stand up. ...read more.

The candle here represents life and the extinction of it if wars go on. In the final chapters of "Regeneration", Rivers reflects upon the existence of certainty and control. All of his life he was bound by abstract concepts such as duty and honour. Though these rules of gentlemanly behaviour always worked for him before, in the chaos and horror of war he is forced to bring them into question. The military and the government in time of war work by basing their decisions upon certainties: "it is wrong to shirk your war duty," "it is right to sacrifice for your country," and "it is wrong to undermine the cause by publicly disagreeing with the war." By insisting upon these certainties, the government controls the minds and actions of men. Much like Dr. Yealland, it uses its arms and branches in this case Rivers to force submission. Yet, after years of working with shell-shock cases at Craiglockhart, Rivers is forced to confront the true definition of madness. Is Sassoon mad for rebelling unwisely against the war? Or is Rivers the one who is truly crazy? He is the one who works to heal people with the sole aim of returning "cured" patients to service, where they only face death. Rivers is forced to consider that he might be mad for working to defend a state that could sacrifice its own children so mercilessly. The questions of right and wrong, duty and honour are mingled and confused in the chaos of war in both texts. ?? ?? ?? ?? ...read more.