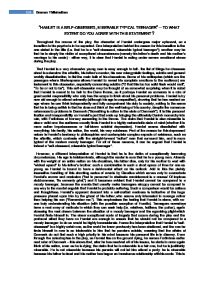 HAMLET IS A SELF-OBSESSED, MISERABLE TYPICAL TEENAGER TO WHAT EXTENT DO YOU AGREE WITH THIS STATEMENT?

"HAMLET IS A SELF-OBSESSED, MISERABLE TYPICAL TEENAGER" - TO WHAT EXTENT DO YOU AGREE WITH THIS STATEMENT? Throughout the course of the play, the character of Hamlet undergoes major upheaval, so a transition in his psyche is to be expected. One interpretation behind the reason for this transition is the one stated in the title (i.e. that he is a "self-obsessed, miserable typical teenager"); another may be that he is simply the victim of exceptional circumstances (namely his father's death and his mother's marriage to his uncle) - either way, it is clear that Hamlet is acting under severe emotional stress during the play. That Hamlet is a very obsessive young man is easy enough to tell - the list of things he obsesses about is extensive: the afterlife, his father's murder, his new misogynistic feelings, suicide and general worldly dissatisfaction, to list the main bulk of his obsessions. Some of his soliloquies (which are the passages where Shakespeare allows Hamlet to reveal his complete emotions to the audience) ...read more.

For all of these reasons, it can be argued that Hamlet is indeed a "self-obsessed, miserable typical teenager". However, a different interpretation of Hamlet is that he is the victim of exceptionally harrowing circumstances. His age is indeterminate, although the reader is sure that he is a young man. Already with the weight of an entire nation on his shoulders, his father dies, only for his mother to wed with "wicked speed" to his father's brother: such a combination in such a short space of time for one as young as Hamlet is bound to have a detrimental effect on his outlook. Add to this the plainly insensitive handling of this shocking series of events by Claudius which serves only to exacerbate Hamlet's sorrow and confusion ("but to persever/ In obstinate condolement is a course/ Of impious stubbornness, 'tis unmanly grief,") and it becomes evident that Hamlet cannot be compared to a moody teenager, because the events that usually make teenagers stroppy cannot be compared in any way to the mental anguish that Hamlet is probably suffering. ...read more.

He is not miserable because his parents will not let him attend a party: he is miserable because his father is dead and his mother has begun an incestuous relationship with his uncle. This is a legitimate reason for misery, and so Hamlet should be treated with a fitting level of compassion - at least certainly not compared to typical teenagers. It is for the reasons above that the statement "Hamlet is a self-obsessed, miserable typical teenager" does not resonate well with the reader: the very fact that he is able to be sullen and even jocular initially ("A little more than kin, and less than kind." "Not so much, my lord, I am too much in the son.") is a testament to his strong personality - his true feelings are revealed in the following soliloquy. The character of Hamlet is far more complex than a comparatively simple teenager; the circumstances far more tragic; the pressure upon him far greater. ?? ?? ?? ?? ...read more.