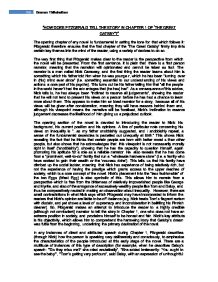 HOW DOES FITZGERALD TELL THE STORY IN CHAPTER 1 OF THE GREAT GATSBY?

"HOW DOES FITZGERALD TELL THE STORY IN CHAPTER 1 OF 'THE GREAT GATSBY'?" The opening chapter of any novel is fundamental in setting the tone for that which follows it: Fitzgerald therefore ensures that the first chapter of the 'The Great Gatsby' firmly imprints certain key themes into the mind of the reader, using a variety of devices to do so. The very first thing that Fitzgerald makes clear to the reader is the perspective from which the novel will be presented. From the first sentence, it is plain that there is a first person narrator, meaning that the narration will opinionated and cannot be taken as fact. The narrator is a man called Nick Carraway, and the first thing the reader learns about him is something which his father told him when he was younger, which he has been "turning over in (his) mind ever since" (i.e. something essential to our understanding of his views and actions: a core part of his psyche). This turns out be his father telling him that "all the people in the world haven't had the advantages that (he has) had". As a consequence of this advice, Nick tells is, he has always been "inclined to reserve all judgements", showing the reader that he will not tend to present his views on a person before he has had a chance to learn more about them. This appears to make him an ideal narrator for a story, because all of his views will be given after consideration, meaning they will have reasons behind them and, although his viewpoint means the narrative will be focalised, Nick's inclination to reserve judgement decreases the likelihood of him giving us a prejudiced outlook. ...read more.

Her actions, such as her "absurd, charming little laugh" also show up her air-headedness; the fact that she is inactive at home in the middle of the day and gossiping with a friend underlines her idleness and is representative of the lack of hard work and immorality which Fitzgerald perceives in the 'old money' bourgeois who inherit their prestige and wealth. Jordan is presented to be a self-centred and rather indolent woman, as shown by her static nature (e.g. she is described as being "completely motionless" when Nick enters the room). In this, she is very similar to Daisy, in representing the attitude of the higher classes. However, Fitzgerald tries to make it abundantly clear that Jordan is also illustrative of the new type of woman emerging during the Roaring Twenties: the newly independent woman; the type of woman who goes out without a chaperone. He achieves this on the most part by giving her a unisex name, and one which is also a combination of two carmakers, increasing the reader's perception of her relative masculinity (indeed, she is almost the polar opposite type of wealthy woman when compared to Daisy). The description of Jordan also hints at her masculine independence through Nick's thoughts ("...which she accentuated by throwing her body back like a cadet"). Furthermore, she shows an arrogance comparable to that of Tom, through one of the few occasions she speaks to Nick in the opening chapter ("'You live in West Egg,' she remarked contemptuously"), stressing her place in the social elite. Last of all in the opening chapter, the character of Gatsby is introduced fleetingly. ...read more.

the events have already occurred), meaning that the prose is a balance between a description of and act which occurred and Nick's own views on what happened: action and reflection, which the reflection occasionally looking further back into time than the story itself (especially when Nick describes his family and his relationship with Tom from Yale). This shows the reader that the views Nick presents are not unfounded, but tempered by experiences which have already happened and the reader is not aware of. The fact that Nick is presenting a tale from the past also ties in to one of the ultimate morals of the story, that no-one can escape the past: Nick has been affected so deeply by the events which occur in the book that he cannot forget it. In the story itself, Gatsby is the main victim of his inability to escape his past, and this is subtly foreshadowed by Fitzgerald's decision to make Nick a retrospective narrator. Fitzgerald tells the story through a person who has the benefit of hindsight, who is commenting on the past, and so has a justifiable and considered opinion on nearly everything. In summary, Fitzgerald uses a wide range of literary tools in the first chapter to delicately convey not only the outline of the story, but many of its themes as well, thus laying the foundations for the story which follows. These tools also make sure all of the components of the story which are introduced here (e.g. the setting, the characters etc.) leave a mark in the mind of a reader, and become something the reader can identify, with the possible exception of the "Great" Gatsby, who remains a mystery at the end of Chapter 1. ?? ?? ?? ?? ...read more.

Fantastic! This is a pleasure to read. The writer engages with the text with enthusiasm and academic rigour, demonstrating a mind at work and excited by the text and authorial devices employed. The range of techniques explored and the supportive evidence is hugely impressive, as is the admirable close scrutiny paid to the text, leading to original interpretations and insights. Contextual knowledge is fluently embedded into discussion. There is a sophisticated ability here to recognise why and how Fitzgerald did what he did; much can be learned from reading this essay. There are some minor points for improvement offered in the comments on the essay.