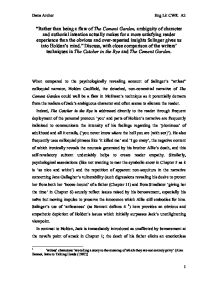 Rather than being a flaw of The Cement Garden, ambiguity of character and authorial intention actually makes for a more satisfying reader experience than the obvious and over-repeated insights Salinger gives us into Holden(TM)s mind.

"Rather than being a flaw of The Cement Garden, ambiguity of character and authorial intention actually makes for a more satisfying reader experience than the obvious and over-repeated insights Salinger gives us into Holden's mind." Discuss, with close comparison of the writers' techniques in The Catcher in the Rye and The Cement Garden. When compared to the psychologically revealing account of Salinger's "artless" colloquial narrator, Holden Caulfield, the detached, non-committal narrative of The Cement Garden could well be a flaw in McEwan's technique as it potentially detracts from the realism of Jack's ambiguous character and often seems to alienate the reader. Indeed, The Catcher in the Rye is addressed directly to the reader through frequent deployment of the personal pronoun 'you' and parts of Holden's narrative are frequently italicized to communicate the intensity of his feelings regarding the 'phoniness' of adulthood and all it entails, ('you never know where the h**l you are [with s*x]'). He also frequently uses colloquial phrases like 'it killed me' and 'I go crazy', the negative content of which ironically reveals the neurosis generated by his brother Allie's death, and this self-revelatory subtext undeniably helps to create reader empathy. Similarly, psychological associations (like not wanting to mar the symbolic snow in Chapter 5 as it is 'so nice and white') and the repetition of apparent non-sequiturs in the narrative concerning Jane Gallagher's vulnerability (such digressions revealing his desire to protect her from both her 'booze-hound' of a father (Chapter 11) ...read more.

In this regard, Chapter 6 of The Cement Garden features a flashback to an occasion when Jack's parents had left the children alone in the house while they attended a funeral, this situation being a parallel to the present lack of parental guidance. The similarity between past and present shows the persistence of Jack's adverse circumstances and elicits sympathy as he is subject to this stagnant lifestyle. It is placed at the beginning of Part 2 to echo the mother's death in Part 1 and prefigure the amoral effect that parentless conditions will have upon Jack, McEwan subtly achieving realism by portraying his past as well as implying a future. Comparatively in Chapter 11 of Salinger's novel Holden's narrative shifts to a description of his early childhood with Jane Gallagher, who he was 'never worried' with. With her, he says, 'All you knew was, you were happy'. The contrast between this idealistic language of a 'happy' past and Holden's 'lonesome and depressed' state on returning to the present in Chapter 12 once again demonstrates his obsession with innocence and childhood through obvious manipulation of tone and highlights the theme of transition within the novel; here also he resists maturity as it makes him 'depressed', the repetitive nature of Holden's frequent reflections on Jane and the past construably rendering his account implausibly digressive (unlike McEwan's more rigidly chronological tale), disrupting the reader's interest and comprehension of the main plotline by interpolating predictably similar memories. Other meanings contained within McEwan's structure also serve a revelatory purpose, the subtle progression of implications and justifications seeming more successful than Salinger's obvious intrusions and disordered chronology. ...read more.

Furthermore, as Jack is shown to seek maturity he is as realistic and empathetic as Holden- perhaps more, as the reader may identify with McEwan's fundamental theme of growing up, portrayed as successful (unlike Holden's transition) through Jack awakening from his metaphorical 'dream'. Salinger's symbolism primarily serves to repeat information, relaying the same message on all levels of textual communication, whereas McEwan employs this method to emphasize an important aspect of Jack's character as he is not forthcoming himself, and to lead the reader's perception past the taboo of incest. Overall, then, McEwan's message emerges effectively despite the ambiguity of his novel, which may even be considered to contribute to a 'more satisfying' reader experience. Jack is presented as real within an exceptional situation, his ambiguous nature utilized to involve the reader in his experiences and develop their understanding of him through McEwan's technique instead, the conclusion leaving the reader satisfied at the possibility of a successful transition into adulthood which has been suspended due to his environment and the initially negative figure of his father. Salinger's message is contrastingly delivered too often, these obvious reiterations- while effectively demonstrating the repetitions of Holden's fixated mind - perhaps even 'predictable and boring' (Ernest Jones, 1951), and on the whole a less satisfying reader experience than The Cement Garden's subtle revelations. Words - 2, 642 1 'artless' characters 'are telling a story to the meaning of which they are not entirely privy' (Alan Bennet, Intro to Talking Heads (1987)) ?? ?? ?? ?? Dana Archer Eng Lit CWK A2 ...read more.