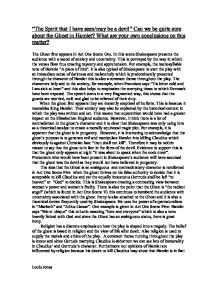 The Spirit that I have seen/may be a devil Can we be quite sure about the Ghost in Hamlet? What are your own conclusions on this matter?

"The Spirit that I have seen/may be a devil" Can we be quite sure about the Ghost in Hamlet? What are your own conclusions on this matter? The Ghost first appears in Act One Scene One. In this scene Shakespeare presents the audience with a mood of anxiety and uncertainty. This is portrayed by the way in which the verses flow thus creating mystery and apprehension. For example, the monosyllabic tone of Horatio "A piece of him". It is also typical of Shakespeare to start the play with an immediate sense of darkness and melancholy which is predominately presented through the character of Hamlet this is also a common theme throughout the play. The characters help add to the anxiety, for example, when Francisco says "Tis bitter cold and I am sick at heart" and this also helps to emphasize the worrying times to which Denmark have been exposed .The speech starts in a very fragmented way, this shows that the guards are worried, cold and glad to be relieved of their duty. When the ghost first appears they are instantly sceptical of its form. This is because it resembles King Hamlet. Their anxiety may also be explained by the historical context in which the play was written and set. ...read more.

However it also presents the audience with how driven Hamlet is with the thought of revenge and he is often named by Shakespeare's contemporaries and critics as "the revenge hero". Although the stereotypical avenger would be taking delight into an ingenious plan of death but again Hamlets passive nature draws him away from this stereotype. Hamlet has debatably been Shakespeare's most famous and popular play. However it has been heavily criticized in the last four hundred years. Structuralism critics would approach Hamlet not looking to find new ideas into human behaviour as many of his plays lack realism, for example, the use of the ghost does not fit in with the world in which the play was set and is purely a conventional device given realistic density. However they couldn't doubt the ways in which Shakespeare used his lyrical prestige to grab the audience's attention and emotions. This is particularly useful in the ghost character because not only does the ghost's imagery emit a dark and menacing presence but when the ghost uses vocabulary like "incestuous" and "adulterate beast". It seems to add to the multitude and ambiguity of the character. There is also feminist criticism that arises in the play and the key quote "frailty, thy name is women" is frequently referred to even today. ...read more.

Together they had a big influence on the period of time between 1585 and 1625 where England produced a monumental display of extraordinarily prestigious work which was worthy of recognition from the Greek reign of tragic dramatic theater for example, the play of Oedipus. Overall Hamlet has achieved the status of one of the most significant revenge tragedies in Drama Theatre. Shakespeare has managed to produce a striving omnipotent play which ingeniously combines the mysterious and supernatural occurrence of the Ghost, with the ordinary, sometimes mundane mood of Elizabethan Europe to create a revenge fuelled climax. I also think its worth mentioning that the Ghost is linked to all the major conflicts and themes in the play, The Ghost is moreover the single most influential theatrical device, used for powering the avenging attitude of Hamlet, to shape him into the perfect protagonist for such a dignified revenge tragedy. In conclusion I feel it is the ghost which gives the play a certain edge of evil and ambiguity. This is why I believe that the ghost is in fact in the form of the devil and his evil can be portrayed through his description of the effects of poison: "swift as quicksilver it courses through the natural gates and alleys of the body, and with a sudden vigour it doth posser and curd, like eager dropping into milk, the thin and wholesome blood..." "the revenge hero"- www.rsc.org.uk Louis Jones ...read more.