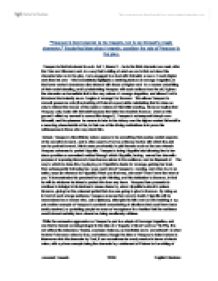 Vasquez is instrumental to the tragedy, but is not himself a tragic character. Exploring ideas about tragedy, consider the role of Vasquez in &quot;Ts Pity She's a w***e&quot;..

"Vasquez is instrumental to the tragedy, but is not himself a tragic character." Exploring ideas about tragedy, consider the role of Vasquez in the play. Vasquez is first introduced to us in Act 1, Scene 2 - he is the third character we meet, after the Friar and Giovanni, and, in a way that is telling of what we are to find out about his character later on in the play, he is engaged in a duel with Grimaldi, a man of much higher rank than his own - this immediately highlights a defining feature of revenge tragedies, in that lower ranked characters often interact with those of higher rank in a manner unbefitting of their social standing, and by intertwining Vasquez with such notions from the off, it gives the character an immediate link to the very nature of revenge tragedies, and allows Ford to introduce him instantly as an 'engine of revenge' for Soranzo. This allows Vasquez to commit gruesome acts (the plucking of Putana's eyes) while maintaining that he does so only to defend the honour of his master; indeed, in this initial meeting, Soranzo implies that Vasquez only duels with Grimaldi because the latter has insulted Soranzo ('and on this ground I willed my servant to correct this tongue'). ...read more.

The fact that he is able to describe Annabella and Giovanni's generation as being corrupt, immediately after having ordered such a horrific fate on Putana, coupled with the way in which he takes obvious glee in the incestuous revelation being made, forces the audience to laugh, and take a form of dark amusement in the juxtaposition of Vasquez's taking a moral high from which he is able to criticize Giovanni, Anabella and Putana, with his ordering of such horrific acts against Putana - this form of macabre humour was common in revenge tragedies, with the fact that it went against the classical idea of decorum, allowing them to stand out as being much more radical and b****y than their traditional counterparts. Though Vasquez is responsible for much of the conflict that occurs throughout the play, he himself is not very conflicted at all. Indeed, Annabella and Giovanni, the central tragic characters of the play, struggle with their consciences throughout the play, such as the way in which Giovanni constantly visits the Friar, or how Annabella, when told by the Friar about the severity of her sins, sobs, and calls herself a 'wretched creature', demonstrating the sorrow she feels at having committed the sin of incest, a sin which has its ...read more.

Ford would have been writing for, the idea of justice being dealt out fairly would have been a cornerstone of everyday life; the fact that Vasquez suffers no great punishment at the end of the play, only serves to further highlight the tragic nature of the severe culmination of Anabella and Giovanni's love, and the horrific events that occur to 'punish' them. We are further pushed away from the idea of any sort of emotional connection with Vasquez, because of his lack of megalopsychia, or 'greatness of soul' - he is not born into a noble rank, nor does he possess such qualities that would be deemed as noble, or that we could perceive as being redemptive, indeed, he shows no real, heartfelt, profound emotion at any point in the play, apart from those points at which he is taking glee in the chaos unfolding around him. This lack of greatness, or status, the lack of the very quality which is (initially, at least) exemplified by Giovanni, through both his being a typical polymath, or Renaissance man, and of his being of noble, respectable birth, is exactly what makes Vasquez the complete antithesis of what it means, at least by traditional standards, to be a tragic protagonist, in the slightest. ...read more.