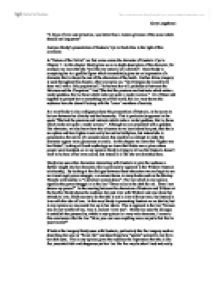 &quot;A blaze of love and extinction, was better than a lantern glimmer of the same which should last long years&quot; Analyse Hardy's presentation of Eustacia Vye in Book One in the light of this comment.

"A blaze of love and extinction, was better than a lantern glimmer of the same which should last long years" Analyse Hardy's presentation of Eustacia Vye in Book One in the light of this comment. In "Return of the Native" we first come across the character of Eustacia Vye in Chapter 7. In this chapter Hardy gives us an in depth description of the character, for example we learn that she "was the raw material of a divinity". Here Hardy is comparing her to a godlike figure which immediately gives us an impression of a character that is above the rest of the characters of the heath. Further divine imagery is used throughout this chapter, other examples are, "On Olympus she would have done well with a little preparation", "In heaven she will probably sit between the Heloises and the Cleopatras." And "She had the passions and instincts which make a model goddess, that is, those which make not quite a model woman." All of these add together to present her as something not of this world, this in a way shows the audience how she doesn't belong with the 'lower' members of society. ...read more.

with Wildeve and also about her attitude to love, which seems to be that she is not in love with any man, but instead in love with the idea of love. In this way Hardy is presenting Eustacia as an idealist, but in my opinion no man could live up to her ideals. This is apparent in the line "Damon you are not worthy of me; I see it, and yet I love you". Hardy also uses the dialogue to establish her personality, which in my opinion is a very vain character, I came to this conclusion after the line "Have you ever seen anything more majestic that that in your travels?" If look at the imagery Hardy uses with Eustacia, particularly the fire imagery such as describing her soul as "flame like" and describing how "sparks" seemed to rise from her dark eyes. This in my opinion gives the audience the impression that she is like fire, uncontrollable and dangerous yet her live like fire may be short lived and easily extinguished. ...read more.

In this novel, Eustacia is the character that does not conform to society; she clearly could care less about what the natives think of her. One thing I perceived in all of the criticisms was the tone of sympathy and liking that pervaded discussions of Eustacia. In class we could not decide whether or not we actually liked her, but the criticisms painted her not only as a tragic figure, but also as a tragic figure that had no part in her own tragedy. In other words, the criticisms seemed to say that Eustacia was a sad victim of circumstance and fate; she was a brilliant woman stuck in a confining atmosphere. As one critic says, "Eustacia finds her potential for effective activity cripplingly limited...emotional power over other individuals is the only kind of influence [she] can exercise." I found myself feeling sorry for her despite the fact that she is immature, impulsive, manipulative and completely selfish. Perhaps these character traits would disappear had she been allowed to express herself in an atmosphere, and with people, equalling her brilliance and passion. ?? ?? ?? ?? Gary Longshawe ...read more.