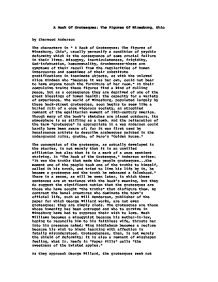 A Book Of Grotesques: The Figures Of Winesburg, Ohio by Sherwood Anderson - review.

A Book Of Grotesques: The Figures Of Winesburg, Ohio by Sherwood Anderson The characters in " A Book of Grotesques: The figures of Winesburg, Ohio", usually personify a condition of psychic deformity which is the consequence of some crucial failure in their lives. Misogyny, inarticulateness, frigidity, God-infatuation, homosexuality, drunkenness-these are symptoms of their recoil from the regularities of human intercourse and sometimes of their substitute gratifications in inanimate objects, as with the unloved Alice Hindman who "because it was her own, could not bear to have anyone touch the furniture of her room." In their compulsive traits these figures find a kind of dulling peace, but as a consequence they are deprived of one of the great blessings of human health: the capacity for a variety of experience. The world of Winesburg, populated largely by these back-street grotesques, soon begins to seem like a buried ruin of a once vigorous society, an atrophied remnant of the egalitarian moment of 19th-century America. ...read more.

By contrast the banal creatures who dominate the town's official life, such as Will Henderson, publisher of the paper for which George Willard works, are not even grotesques; they are simply clods. The grotesques are those whose humanity has been outraged and who to survive in Winesburg have had to suppress their wish to love. Wash Williams becomes a misogynist because his mother-in-law, hoping to reconcile him to his faithless wife, thrusts her into his presence naked; Wing Biddlebaum becomes a recluse because his wish to blend learning with affection is fatally misunderstood. Grotesqueness, then, is not merely the shield of deformity; it is also a remnant of misshapen feeling, what Dr. Reefy in "Paper Pills" calls "the sweetness of the twisted apples." As they approach George Willard, the grotesques seek not merely the individual release of a sudden expressive outburst, but also a relation with each other that may restore them to collective harmony. They are distraught communicants in search of a ceremony, a social value, a manner of living, a lost ritual that may, by some means, re-establish a flow and exchange of emotion. ...read more.

On the eve of his departure from Winesburg, George reaches the point "when he for the first time takes the backward view of life.... With a little gasp he sees himself as merely a leaf blown by the wind through the streets of his village. He knows that in spite of all the stout talk of his fellows he must live and die in uncertainty, a thing blown by the winds, a thing destined like corn to wilt in the sun.... Already he hears death calling. With all his heart he wants to come close to some other human, touch someone with his hands...." For George this illumination is enough, but it is not for the grotesques. They are a moment in his education, he a confirmation of their doom. "I have missed something. I have missed something Kate Swift was trying to tell me," he says to himself one night as he falls asleep. He has missed the meaning of Kate Swift's life: it is not his fault: her salvation, like the salvation of the other grotesques, is beyond his capacities. ...read more.